UK government reiterates call for calm after nights of violence 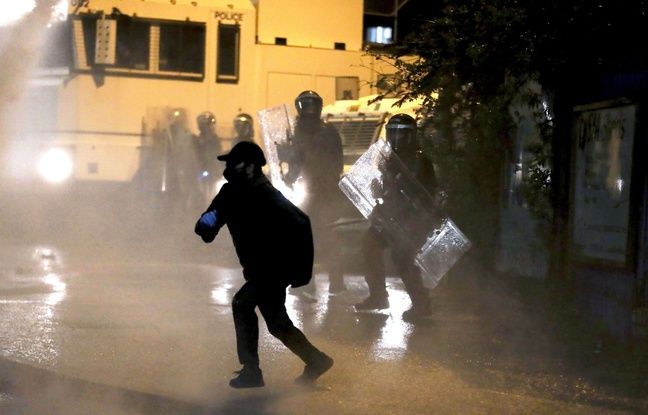 The British government on Friday reiterated its call for calm after new clashes between rioters and police in Northern Ireland, where Brexit undermines a fragile peace.

For more than a week, the British province has been shaken by violence unprecedented for several years, especially in loyalist areas with a Protestant majority where the consequences of leaving the European Union have created a feeling of betrayal and bitterness .

Despite calls from London, Dublin and Washington to stop the violence, the capital Belfast once again set fire to the night from Thursday to Friday. In a western neighborhood, riot police, caught between the two camps, were targeted by Molotov cocktails and cobblestones as they tried to prevent hundreds of Republican protesters from heading towards the Unionists. They were pushed back by a water cannon.

This violence, which has so far injured more than 70 police officers, resurfaces the specter of the “Troubles” and their 3,500 deaths, which for three bloody decades opposed Republicans, mainly Catholics in favor of reunification with Ireland, and unionists. Protestants, fervent defenders of belonging to the United Kingdom.

Faced with this escalation, the British government, which dispatched the Minister of Northern Ireland Brandon Lewis to the site, reiterated its call for calm, which has so far remained a dead letter. “Violence has no role to play in solving the problems,” Transport Minister Grant Shapps insisted on Sky News on Friday, deeming the situation “very worrying”. “We have to make sure people talk to each other to solve their problems,” he added.

The sister of Lyra McKee, a journalist shot dead in 2019 clashes in Londonderry, has urged Northern Irish politicians to “engage in dialogue with those who say they are so dissatisfied they are opting for violence,” saying some “ignored” them while others “lit the fire”. “We need good and real leadership before someone is killed,” pleaded Nichola McKee Corner to Irish channel RTE.

On Thursday, the British and Irish Prime Ministers had already called for “dialogue”, joining their voices to those of the leaders of Northern Ireland, unionists as well as Republicans, to condemn this “unacceptable” violence. The White House also said it was “concerned”.

“Peace on the surface”

Brexit has weakened the delicate balance between communities in the province, by requiring the introduction of customs controls between the United Kingdom and the EU. In order to avoid the return of a physical border between the British province and the Republic of Ireland, a member of the EU, these controls are held in Northern Irish ports. But these new provisions disrupt trade and are denounced by unionists as a border between Northern Ireland and Great Britain, and a betrayal on the part of London.

“There are political ways to talk about the Northern Irish protocol,” John O’Dowd, a local MP for the Sinn Fein Republican Party, told the BBC. “Let us not try to find excuses for criminal groups that should not exist 23 years after the Good Friday agreement.”

Last week, violence first erupted in Londonderry, before spreading to a loyalist neighborhood in Belfast and its surroundings during the Easter weekend. The police spoke Thursday of unrest on a scale never seen “for several years” and warned that were among the demonstrators, including young adolescents.

A police official, Jonathan Robert, estimated Friday that this violence was “not orchestrated by a particular group”, while paramilitary groups had previously been singled out. He called on parents and community leaders to dissuade young people from going into confrontation.