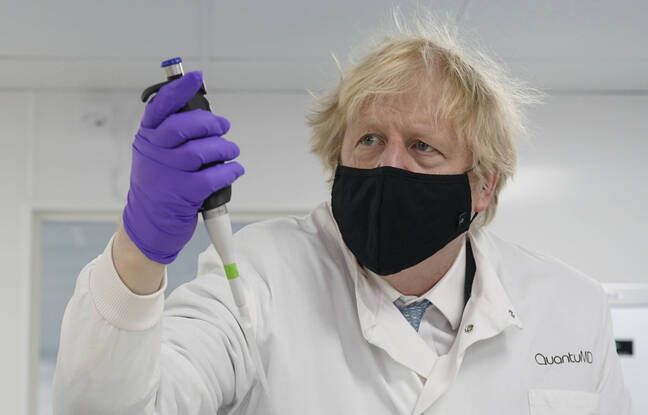 Vaccinate 15 million people before mid-February: the goal seemed far too ambitious when it was announced, but the bet is successful. To achieve this, the United Kingdom has mobilized scientists, caregivers, but also its army and thousands of volunteers.

From the beginning of January 2020, when the new coronavirus has only just been identified in China from where it has started to spread, the team of researcher Sarah Gilbert at the University of Oxford there. splint. On the basis of her work on Ebola and the Seas, she designed in a few days a first vaccine, which would become the one produced by the AstraZeneca laboratory, now at the heart of the British vaccination campaign.

The next steps kick in very quickly. In the spring, a partnership was signed with AstraZeneca and clinical trials were launched. Quickly, the government of Conservative Prime Minister Boris Johnson, also criticized for its chaotic management of the health crisis, released tens of millions of pounds to support research.

In May, the executive set up a working group responsible for securing the country’s supplies. At the head of this “taskforce”, Kate Bingham, a biochemist who specializes in venture capital and investments in the health sector, and therefore in financial and scientific betting.

In all, 367 million doses of seven different vaccines will be ordered. Several months ahead of the European Union, the authorities are thus pre-ordering 100 million doses of the AstraZeneca / Oxford vaccine even before it has proven its effectiveness. They also ensure the establishment of production units for several vaccines on British soil.

According to Kate Bingham, the UK has managed to be “nimble and cooperative” in attracting manufacturers, thus compensating for weaker purchasing power compared to the EU or the US. Some in the government even attribute to Brexit the fact of having had more leeway.

The United Kingdom is the first Western country to have approved a vaccine, Pfizer / BioNTech, as of December 2, 2020, thanks to an ongoing review of the data provided by the laboratory over the trials, as part of an authorization for emergency use. He proceeds in the same way when he becomes the first in the world to give the green light, at the end of December, to the AstraZeneca / Oxford vaccine, deployed from the beginning of January.

The latter was only authorized a month later by the EU, where some countries chose not to administer it to those over 65 due to a lack of data. In a strategy first criticized by some experts, then validated by the World Health Organization, the administration of the second dose is spaced up to 12 weeks in order to provide immunity to as many people as possible.

Very quickly, once the vaccines were approved, more than a thousand vaccination centers were set up, in hospitals in particular. Important centers, in stadiums, museums, even cathedrals, were set up with the support of the army: it was the largest logistical operation since the Second World War.

To assist the caregivers, an army of volunteers is mobilized to administer the vaccine. Thus, the charitable organization St John Ambulance plans to recruit some 30,000 volunteers by spring, often people without medical qualifications but specially trained for the occasion. Encouraged by the authorities, 400,000 volunteers had also registered with the public health system, the NHS, to participate in clinical trials, according to Kate Bingham.

Acceptance of vaccination is very high in the UK. To encourage more reluctant minorities to also be vaccinated, and to fight misinformation about vaccines, the NHS broadcasts videos in different languages ​​and calls on celebrities. The government intends to have vaccinated the entire adult population by September, but Boris Johnson has already warned that a new campaign could be necessary in the fall, especially in the face of new variants.