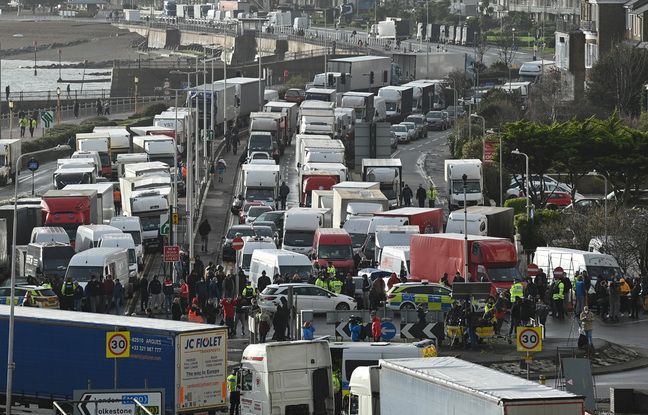 The United Kingdom slowly began to emerge from the isolation caused by a new strain of coronavirus on Wednesday, with a resumption of cross-Channel traffic under tension and which is expected to take days, to the chagrin of truckers stranded as Christmas approaches.

“They say that there will be a Covid test for us” but “nothing comes”, laments, very moved, Ezdrasz Szwaja, a Polish driver trapped, like thousands of others, by the closure of the French border for 48 hours after identifying this potentially more contagious mutation.

At the end of the day, large signs announced in Dover, the first cross-Channel port, the start of screening for drivers, on edge since the announcement Tuesday afternoon of an agreement to resume traffic to France on condition of showing a negative result.

A few dozen truck drivers, stranded since Sunday, often without toilets or hot meals, had tense and briefly muscular exchanges with the police early Wednesday morning. A man obstructing a freeway was arrested.

A race against time has begun, with the help of the army, to carry out these thousands of rapid tests, a logistical challenge for which the army is mobilized, in order to allow the British supply chain to return to full force. diet before fresh product shortages emerge.

“It will take a few days for us to get out of this situation,” warned the British Minister for Local Government, Robert Jenrick. According to the government, some 5,000 heavy goods vehicles were stranded in Kent around the port area on Wednesday, including 3,800 at the nearby former airport of Manston, where drivers can be tested.

“It was a first for me in England, and possibly the last,” says German Sergej Merkel, sitting in the cab of his truck, resigned to spending Christmas there. If a driver is positive after a rapid test that delivers a result in about 30 minutes, they will be subjected to a PCR test and placed in hotel isolation for ten days if they are found to be positive again.

New wave of contaminations at a new strain

Faced with a new wave of contaminations attributed to the new strain of the coronavirus, partially reconfined and isolated by the decision of some fifty countries to cut their links, the United Kingdom has one of the heaviest results of the pandemic in Europe, with more than 69,000 dead and a record of nearly 40,000 contaminations recorded on Wednesday.

The spread of the virus has prompted an extension of the re-containment in London over the weekend and parts of south-east England to other areas from December 26. Thus, 24 million people will then be subjected to confinement, or 43% of the population of England.

Added to this is the discovery of two cases in travelers from South Africa of another new variant of the virus “highly worrying” because it would be more contagious, according to the Minister of Health Matt Hancock who announced measures emergency to prevent its spread.

Despite the crisis exit agreement with France, congestion in the port of Dover continues to fuel fears for supplying the country, which is very dependent on truck rotations.

“Until the delay is cleared and supply chains return to normal, we anticipate problems in terms of availability of some fresh products,” said the organization representing the distributors.

Faced with this risk, amplified by Christmas shopping and some panic shopping that left store shelves empty, supermarket giant Tesco announced on Tuesday it was rationing certain basic products such as eggs, rice and toilet paper.

The fear is all the stronger as the days are numbered before the end of the post-Brexit transition period on December 31, which could be accompanied by serious disruptions in trade in the absence of a trade agreement between London and the EU.

Provided they have a negative test, the French and foreigners residing in France or in the European area, as well as those who “must make essential trips”, are for the moment authorized to cross the border.