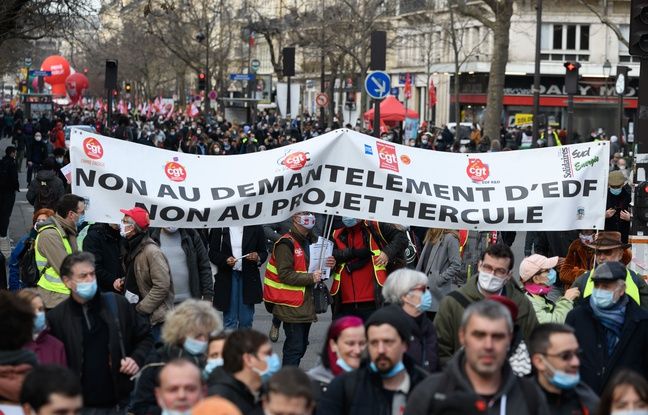 Hercules weakened? The unions are re-mobilizing this Wednesday against the EDF split plan while the government has opened the door to a “plan B”. It will be the 5th day of strike at the call of the inter-federal CGT, CFE-CGC, CFDT, FO since November 26, the 2nd in 2021. Each time, the management, which refuses to comment , considered more than one in four agents to be on strike.

According to the unions, several scattered actions could take place but the biggest rally is planned from 2 p.m. around the National Assembly. EDF CEO Jean-Bernard Lévy, who will also be heard in the morning by senators, as well as Finance Minister Bruno Le Maire, must be heard on his project. First to appear before these same deputies, the Minister for the Ecological Transition, Barbara Pompili explained on Thursday that it would be necessary to “find a plan B” if France does not agree with the European Commission on the future of EDF .

National elected representatives in the movement

Since the last strike of January 19, the national elected representatives, after the local communities, have indeed come to swell the movement. 80 deputies from the left as from the right thus co-signed a letter of protest and asked the government to receive representatives of the EDF inter-union. “We won the battle of ideas,” says Sébastien Menesplier, federal secretary of the CGT Mines Energie federation. We suspect that there is a problem somewhere. (…) We consider that we have never been so close to obtaining the withdrawal of the project, it is important to remain mobilized, ”he adds, denouncing the vagueness that surrounds him.

If the action has intensified in recent months, the unions have indeed shown their frank opposition since the presentation of the project in June 2019. They fear a “dismantling” which could result in a split into three entities of the electrician detained in 83% by the State: a public company (EDF bleu) for nuclear power plants, another (EDF vert) listed on the stock exchange for the distribution of electricity and renewable energies, and a third (EDF azur) which would cover the dams hydroelectric.

A risk of privatization of profits, says Nicolas Hulot

The unions call for EDF to retain its status as an “integrated group”, whose activities range from electricity production to network management and distribution to households. The project, which was initially due to be presented at the end of 2019, has fallen behind schedule because it is conditional on the progress of discussions between France and Brussels. Nevertheless, the threat of the use of ordinances to pass this reform seems to have dissipated.

On Friday, the former Minister of the Ecological Transition Nicolas Hulot reassured the protesters by declaring in The world that this “project risked making taxpayers bear the astronomical additional costs of nuclear power and completely privatizing the economic opportunities and benefits of renewable energies”. Like the opponents, he asks to “postpone” Hercules and to initiate a real debate on the future of EDF, faced with the challenge of its modernization while its debts are suffocating it.

For lack of manpower, a restaurateur installs robots that serve customers