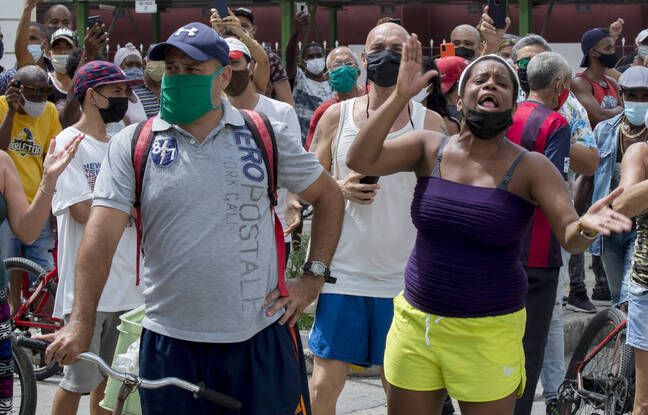 Apart from rallies organized by the Communist Party, Cuba generally does not see any demonstrations in its streets, let alone when it comes to criticizing the regime in place. But with the worst economic crisis on the island in 30 years, locals no longer hesitate to take risks. To the cries of “Freedom! “And” Down with the dictatorship! », Demonstrators marched on Sunday in several cities across the country.

Widely disseminated via social networks, these demonstrations began spontaneously in the morning. In San Antonio de los Baños, a small town of 50,000 inhabitants about thirty kilometers from Havana, several thousand demonstrators found themselves in the street. In the capital, a few hundred others marched. Other protests were reported and broadcast live, via Facebook or Twitter, across this country where mobile internet only arrived at the end of 2018.

In an attempt to regain control, President Miguel Diaz-Canel also made the trip to San Antonio de los Baños, accompanied by activists of the single party in power who marched shouting “Long live Cuba!” “And” Long live Fidel! », While on its way, the inhabitants continued to protest aloud. It must be said that the Covid-19 pandemic has plunged Cuba into a serious economic crisis. Every day, Cubans have to wait long hours in queues to stock up on food and also face a shortage of medicines. The economic difficulties even pushed the authorities to cut electricity several hours a day in a large part of the territory.

“The energy situation seems to have heated some spirits here,” admitted Miguel Diaz-Canel, accusing the American sanctions – imposed by Donald Trump and left unchanged by Joe Biden – of being responsible for the crisis. “If you want the people to be better, first lift the embargo” imposed since 1962, he added.

Record of deaths due to Covid-19

The president however admitted that “people came to express their dissatisfaction”, speaking of “disoriented revolutionaries”. But “there are many of us, and I the first, to be ready to give life for this revolution,” he said, a message then repeated in a live televised address.

These protests came on the day Cuba recorded a new daily record of contamination and deaths from the coronavirus, with 6,923 cases and 47 deaths in 24 hours, for 1,537 deaths in total. Under the keywords #SOSCuba or #SOSMatanzas (named after the most affected province), appeals for help are multiplying on social networks, as are appeals to the government to facilitate the sending of donations to the ‘foreign.