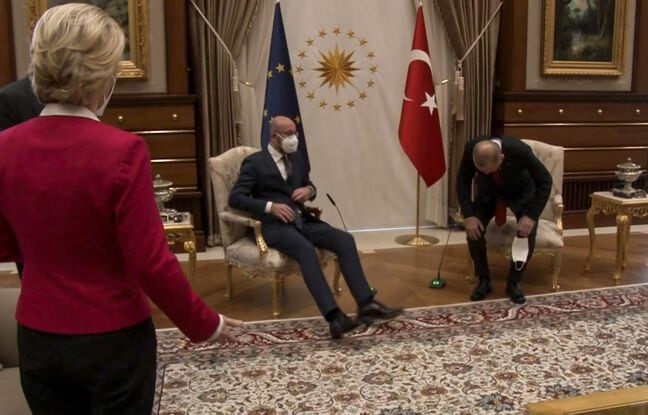 “Presidents von der Leyen and Michel held their usual weekly meeting and discussed a series of topical issues,” said the spokesperson for the European Commission after the meeting.

A question of protocol or sexism?

The interview took place at the Berlaymont, headquarters of the European Commission and lasted nearly two hours. The controversy over the precedence given to Charles Michel during their meeting on Tuesday April 6 in Ankara with Turkish President Recep Tayyip Erdogan was seen as an affront by Ursula von der Leyen.

The President of the Commission had been placed back on a couch, while Charles Michel and Recep Tayyip Erdogan took their places in the only two armchairs available.

The services of the Council ensure that Charles Michel takes precedence for the international protocol. The Commission disputes this reading and demands the same protocol rank for the two leaders.

Ursula von der Leyen asked her services to contact their counterparts in the Council to “find a ‘modus vivendi’ in order to avoid such situations in the future,” her spokesperson Eric Mamer explained earlier today. A memorandum which sets out in five points the requests of the President of the Commission on the basis of “the interpretation of the rules in force”, was sent by email to the collaborators of Charles Michel, he specified.

Bisbille between Commission and Council

The text is analyzed as “a series of conditions” imposed by the Commission with the desire “to weaken the European Council”, told AFP a representative of the Council, the body representing the 27 member states. “The Commission is taking advantage of the incident to call into question the treaties, in particular Article 15” which details the responsibilities of each, he maintains.

The European executive denied having such an intention: “We do not claim anything more than what is in the treaties”, assured Eric Mamer. “It is absolutely not for Mrs von der Leyen to want to speak in place of the President of the Council on questions of common foreign and security policy”, he stressed.

Pinned down by many European elected officials for his silence in Ankara, Charles Michel defended himself from any sexism, assuring in an interview to several European media that he had not reacted to avoid “a much more serious (diplomatic) incident” with Ankara. “I won’t hide from you that I haven’t slept well at night since,” he said.

It was the first time on Monday that the two leaders had spoken to each other since the incident, despite previous attempts by Charles Michel to contact Ursula von der Leyen. “After Ankara, the president went to Jordan, then she went to Germany for the first time since Christmas to find her family, and during this stay, she privileged her family relations”, explained the spokesperson of the Commission.

The presidents of the two institutions will be heard Tuesday at the end of the day by the heads of the political groups in the European Parliament, where a debate on the “Sofagate” has been called for.