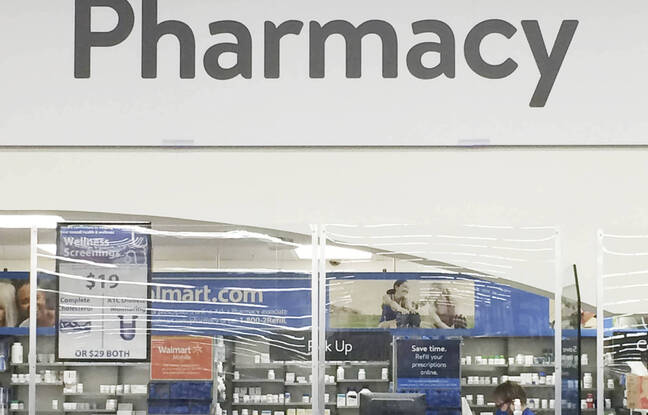 Lack of vigilance and awareness. Despite Walmart’s attempts to ignite a backfire, American justice has decided to sue the distribution giant, accusing it of fueling the opioid crisis which has left hundreds of thousands of deaths in the United States. .

The Ministry of Justice calls for “civil sanctions which could amount to billions of dollars,” he said in a statement on Tuesday.

According to the ministry, Walmart “illegally distributed controlled and prescription substances during the height of the opioid crisis” to pharmacies the group operates across the United States. “Being one of the largest drugstore chains and one of the largest drug distributors in the country, Walmart had the responsibility and the means to help prevent opioid diversion,” said Jeffrey Bossert Clark, prosecutor. Acting Deputy General, cited in press release.

“Instead, and for years, (Walmart) has done the opposite: accepting thousands of invalid prescriptions in its pharmacies and failing to report suspicious prescriptions for opiates,” he added, noting that “This illegal behavior has contributed to the epidemic of opioid abuse across the United States.” Justice relied in particular on the statements of officials of the group who reported “enormous pressure to process the orders”. It was necessary at all costs to “stimulate sales” and quickly process prescriptions to build customer loyalty, according to one of them.

Walmart responded by saying that the Justice Department’s lawsuits were “marred by historic ethical violations and that this lawsuit invents a legal theory that illegally forces pharmacists to stand between patients and their doctors, which is riddled with factual errors and which selects documents by taking them out of context ”. Addiction to opioid drugs killed more than 400,000 people in the United States between 1999 and 2018.

Their consumption exploded from 2013, leading President Donald Trump to declare a “public health emergency” in 2017. This crisis was even considered responsible for the decline in life expectancy in the United States between 2014 and 2017 .

The announcement of justice comes two months to the day after Walmart filed a lawsuit in Texas court. The group then claimed to be the victim of an unjust attempt by the government to make it “wear the hat” for the overuse of ultra-addictive opiate drugs.

In its complaint, the supermarket chain – which has some 5,000 stores in the United States, with almost all pharmacy points – estimated that by criticizing its pharmacists for not having refused to provide opiates prescribed by doctors, the ministry Justice and the US drug regulatory agency, the DEA, put pharmacists “in an untenable position.”

Driven by aggressive marketing from pharmaceutical companies, especially to doctors, the prescription of opioid pain-relieving drugs, hitherto reserved for serious illnesses, exploded in the late 1990s. Walmart accuses the DEA of seeking to avoid its “profound errors” in the management of this crisis: audits have indeed concluded that the federal agency had not, as it should have, prevented laboratories from producing ever larger quantities of these drugs, nor, in 70 % of cases, withdrawn their license to doctors whose prescriptions were questioned.

According to the complaint, the ministry and the DEA are bitter against Walmart, spending for several years considerable sums on an investigation which, failing to lead to criminal proceedings, would now aim to extract substantial civil damages from it. The group asked the Texas court to make it clear that the group and its pharmacists did not have the legal responsibilities the government and the DEA would want them to have. For the time being, this complaint has not been successful.