Vaccine, climate and global minimum tax on the menu for the meeting which opens this Friday in London 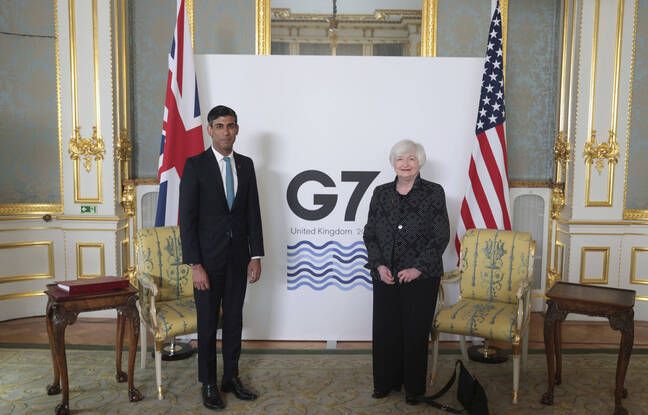 It is a small summit that precedes the large one. This Friday in London, the finance ministers of the seven great world powers are meeting on the occasion of the G7 Finance meeting. This is the first time since the start of the pandemic that these ministers have met in person. This event precedes the G7 of heads of state in Cornwall (southwest England) the following week.

The question of a global minimum tax, the first “pillar” of a vast tax reform carried by the OECD, will hold the upper hand, with the second aspect being the possibility of taxing the profits of large multinationals, in particular the digital giants. , where they make their profits and no longer just where they are registered.

“We want companies to pay the right amount of tax in the right place and I hope we can get a fair deal with our partners,” UK Finance Minister Rishi Sunak said in a statement released by the Treasury in opening of the meeting. The daily The Guardian gives for example Thursday the Irish subsidiary of Microsoft which did not pay any tax on the companies last year because it is registered in Bermuda, in spite of profits of 315 billion dollars.

For the G7, it is a question of responding to the “tax avoidance strategies” of certain companies, underlines a source close to the negotiations, according to which one has “never been so close to an agreement” on the question. This project, desired in particular by Paris for several years, has benefited from a flashback thanks to the coming to power of Democrat Joe Biden, more favorable to multilateralism than his predecessor, the Republican Donald Trump.

A minimum corporate tax of 15%?

In addition, Americans like many other countries are looking for new resources to replenish their public finances hard hit by the pandemic, with support measures or stimulus packages running into the hundreds of billions of dollars. The Biden administration had initially spoken of a minimum corporate tax rate of 21% before changing its mind to 15%, in order to rally more votes.

The G7 Finances should express “strong support” for an “ambitious” minimum corporate tax and a “fair” distribution of “rights to tax” the profits of multinationals, especially the big names in digital, according to the draft. joint press release. A formal agreement could only be announced at the next G20 finance ministers in July in Venice, before validation by the 38 OECD countries.

Ireland and Hungary opposed to this tax

Faced with countries which have already expressed their opposition to the project, such as Ireland or Hungary, whose corporate tax rates are particularly low, the G7 countries are counting on an “international negotiation movement” which could bring the refractory to rally.

According to the provisional text, the G7 countries (United Kingdom, France, Germany, Italy, United States, Canada, Japan) should also commit to “maintaining support policies” for their economies, particularly with regard to new variants of the virus that could derail the recovery. They will reiterate promises of aid to developing countries, particularly in obtaining anti-Covid vaccines.

The fight against climate change will also take center stage, notably with a debate on international standards in terms of environmental transparency, CO2 markets and green finance. “I am determined that we will work together in unity to address the most pressing global economic challenges – and I am extremely optimistic that we will have concrete results this weekend,” added Rishi Sunak.

US Treasury Secretary Janet Yellen also said in a speech Thursday that about “70% of global CO2 emissions come from the construction and use of infrastructure.” She adds that at least $ 2.5 trillion is needed to green infrastructure around the world, calling on the private sector to contribute alongside governments. According to the German daily Handelsblatt, a G7 initiative for global infrastructure is in the works and could be discussed or even be the subject of an agreement at the meeting of heads of state in Cornwall at the end of next week.