Vaccines, golf, Khashoggi … What to remember from the virtual G20 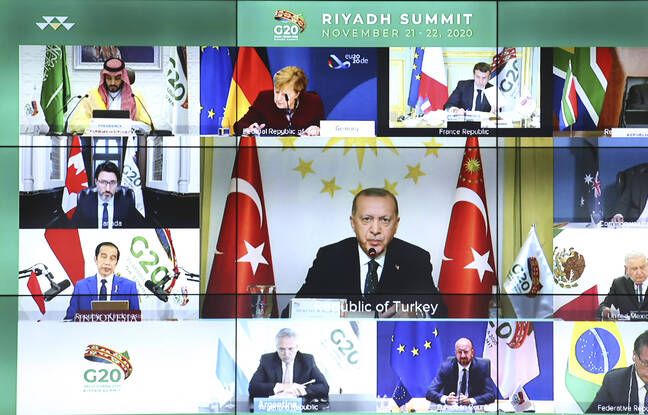 Promises on access to vaccines, an American president at golf, Saudi organizers questioned on the Khashoggi affair… What should be remembered, in four points, from the two days of a strange virtual G20 summit.

The novel coronavirus pandemic has claimed nearly 1.4 million lives worldwide. And the subject of vaccines dominated the debates of the G20, amid concerns about their access for the poorest countries. “We will stop at no effort to ensure affordable and equitable access” to future vaccines, G20 members pledged in their final statement on Sunday.

The leaders of the largest economies added “fully support” the mechanisms put in place by the World Health Organization (WHO) to ensure that future vaccines are not reserved for prosperous countries, but without mentioning the amount of aid. . The United Nations estimate the financing need at 28 billion dollars (23.6 billion euros), including 4.2 billion in emergency. “We will only stop Covid-19 through solidarity,” said WHO Director General Tedros Adhanom Ghebreyesus.

Trump “for a long time”?

In a brief speech on Saturday, shortly after the opening of the debates, US President Donald Trump praised his own record, and in particular his action to “launch revolutionary treatments and develop vaccines in record time” against Covid-19.

According to a participant, Donald Trump, who disputes his defeat in the presidential election, would have said: “I look forward to working with you in the future and for a long time.” Donald Trump, who had shaken up previous editions of the G20 by his virulent challenge to the very principle of multilateralism, subsequently left the White House to go to his golf club near Washington.

On Sunday, the outgoing president – in power until January 20 – took advantage of an intervention on the climate to reaffirm his hostility to the Paris Agreement which, according to him, was designed to “kill the American economy”. President-elect Joe Biden has promised to bring the United States back into the system.

The shadow of the assassination of Saudi journalist Jamal Khashoggi still hung over the event, which Riyadh hoped to make a sumptuous showcase of its modernization and economic reforms.

During a press conference, Minister of Investment Khalid al-Falih was questioned whether the impact of this crime had caused economic damage to the kingdom.

In a country unaccustomed to journalists asking disturbing questions, the moderator wanted to evade. But the minister insisted on responding. “Investors are not journalists, they are looking for countries where they can have confidence in a government that is efficient and makes appropriate economic decisions,” he shrugged.

The “whole world is watching” … in video

Pandemic obliges, the image that will remain of this G20 will be that of a screen on which have appeared the miniatures of the great world leaders around the Saudi King Salman, elderly and weakened, alongside the Crown Prince Mohammed ben Salman.

A virtual format that has become familiar in these times of generalized physical distancing and always accompanied by some technical adjustments. The Saudi leader appeared live earlier than expected, and the link was quickly cut off after the aide whispered warnings to the monarch.

Chinese President Xi Jinping was spotted in deep discussion with an aide waving a remote control towards the camera, while Angel Gurria of the Organization for Economic Co-operation and Development (OECD) put his smartphone away after realizing that ‘he was in the picture.

Enough to take away a lot of its luster from this great international meeting, usually less expected for its official program, generally agreed, than for bilateral meetings and brief aside aside between the great leaders.