Very divided, the Senate decides on the legalization of abortion 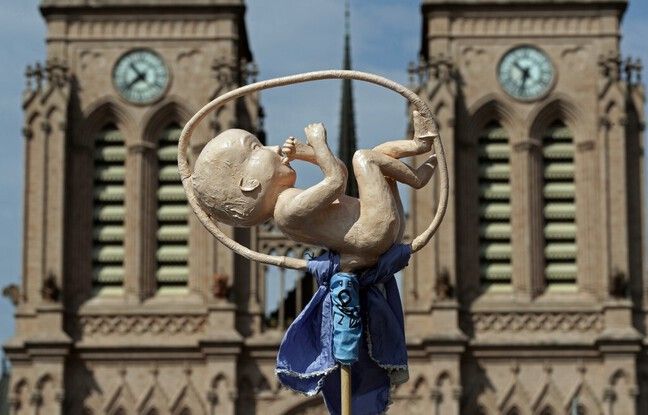 With as many votes “for” and “against”, the law legalizing abortion in Argentina, already approved by the deputies, must be debated this Tuesday in the Senate, and the debates promise to be intense.

In 2018, the senators of this very Catholic country, and deeply divided on the issue, had already rejected by seven votes a similar text which authorized voluntary termination of pregnancy (abortion) up to 14 weeks of pregnancy.

A gathering of Catholics

For the moment, abortion is only allowed in the event of rape or of danger to the life of the mother, according to a law dating from 1921. After the favorable vote of the deputies on December 11 – 131 votes in favor, 117 against and 6 abstentions – all eyes are now on the upper house, reputed to be more conservative. The parliamentary session will begin at 4 p.m. local (7 p.m. GMT) and the vote is expected to take place overnight from Tuesday to Wednesday. Center-left president Alberto Fernandez, in power since the end of 2018, had promised during his campaign to resubmit the legalization of abortion to parliamentarians.

“I am Catholic, but I must legislate for everyone, it is a very serious public health issue”, recently argued the Head of State. But all the senators of his majority are not in favor of the text. Despite the coronavirus pandemic, pro-abortion and anti-abortion activists planned to gather in front of Parliament on Tuesday to express their support or their rejection of the text. The Catholic Church and Evangelicals have launched a call to “unite to implore respect and care for the life to be born”, with a day of fasting and prayer. Recognizable by their sky blue scarf, opponents plan to pray in front of Parliament until the results are announced.

“Like two years ago, the Conference of Argentine Bishops (CEA) lobbied against the law with governors, officials and parliamentarians, and Pentecostal churches occupy public space,” analyzes sociologist Fortunato Mallimaci. The pro-abortion, rallied around the color green, made an intense campaign on social networks. In particular the Campaign for a legal, safe and free abortion, which brings together more than 300 feminist organizations, already very mobilized in 2018.

“The strategy of criminalization, of stigmatization, of restriction of freedoms from which women and the bodies of pregnant women have suffered historically, has lasted long enough! », Launched on social networks Fabiola Heredia, director of the Anthropology Museum of the University of Cordoba (center). Only 70 senators, out of 72, are expected to participate in the vote: one senator was suspended after a complaint for sexual assault and ex-president Carlos Menem (1989-1999), 90 years old and known for his anti-abortion positions, is hospitalized.

In case of a tie, the ex-president (2008-2015) and current vice-president Cristina Kirchner, in favor of abortion, should participate in the vote, as provided by law. According to the government, between 370,000 and 520,000 clandestine abortions are performed each year in the country of 44 million inhabitants, where 38,000 women are hospitalized for complications from clandestine abortions. To try to convince the senators to vote for the text, the latter includes the possibility for doctors to assert their “conscientious objection”.

At the same time, another bill, which will also be debated on Tuesday by senators, created an allowance of “1,000 days” intended to support mothers during their pregnancy and the first years of the child, so as to reduce abortions. for economic reasons. In 2010, the South American country authorized same-sex marriage and approved in 2012 and a law on gender identity.