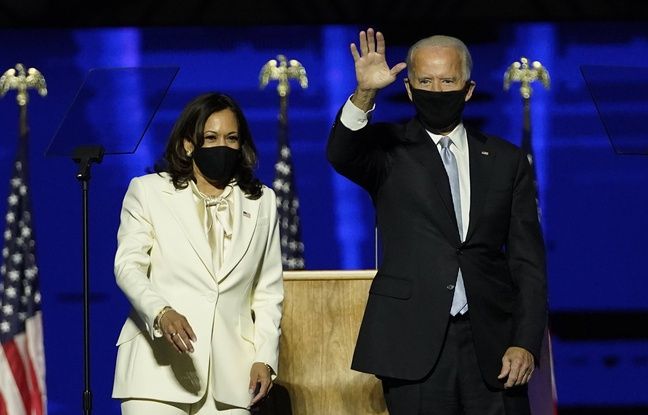 He came running, in front of a cheering crowd gathered in “drive-in”. And with an energy that we had not really seen in this campaign, Joe Biden claimed “a clear victory, a victory for the people” in the US presidential election on Saturday night. Even if Donald Trump technically did not admit defeat and promised to file new appeals, Joe Biden has surpassed the majority of the voters and should, barring any rebound, be elected by the electoral college on December 14 to become the 46th President of the United States.

Kamala Harris first took to the stage in Wilmington, Delaware for a historic moment. Because if the results are confirmed, the former senator from California will become the first woman, but also the first African-American person and Indo-American vice-president. Dressed in white, in homage to the suffragists, she paid homage to the “generations of women”, of all origins, who “paved the way” for her.

“Tonight, I reflect on their struggle, their determination, and the strength of their vision…and I stand on their shoulders,” VP-elect Harris says, reflecting on the 19th Amendment and Voting Rights Act. “While I may be the first woman in this office, I will not be the last.” pic.twitter.com/Vaz4BhgqJB

Joe Biden wants to “unify America” ​​and tackle the Covid

“I pledge to be a president who unites and not who divides,” said Joe Biden, promising “to unify America”. As tradition dictates, he assured that he would work “as hard for those who voted for [lui] only for those who have not done it ”and would not be a“ Democratic president but an American president ”.

BREAKING: President-elect Joe Biden: “The people of this nation have spoken. They delivered us a clear victory, a convincing victory, a victory for we the people.” https://t.co/eJ4LLajSB6 pic.twitter.com/7coj9EtgOA

“You’ve always had my back,” he says. “And I’ll have yours.” pic.twitter.com/XVY1j8eP8z

Joe Biden especially thanked the African-American community for having “always supported” him. And he promised to fight to fight against “systemic racism”.

He also wants to restore “dignity and decency” and called on Democrats and Republicans to collaborate in Congress. But if the Republicans control the Senate – we will be set on January 5 after two second rounds in Georgia – Joe Biden will find Republican Mitch McConnell, who had led a ruthless obstruction against Barack Obama. In his message of congratulations, the former Democratic President also recalled: faced with a pandemic, an economic crisis and racial injustices, “the challenge is immense”.