VIDEO. Ecuador in shock after the barbarism of the “massacre” of 79 prisoners 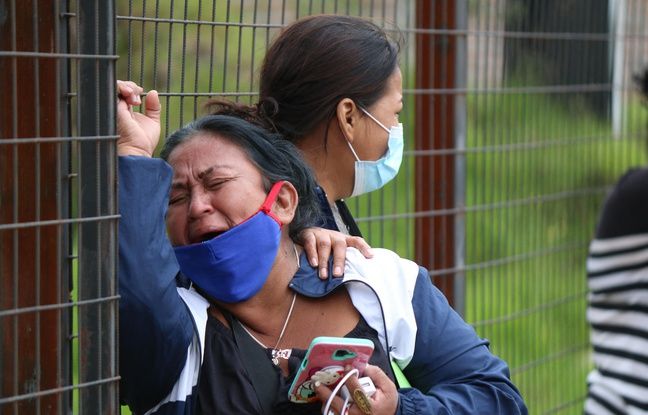 Bloodied corpses, some beheaded, piled up to be burned: On Wednesday, Ecuador was horrified by the violence that had occurred the day before in several prisons in the grip of a gang war, which resulted in 79 deaths in that single day.

It was “an extermination between criminal gangs”, declared President Lenin Moreno, the day after what he called “barbarism”.

This small country of 17.4 million inhabitants, nestled between the Pacific Ocean, the Andes mountains and the Amazon jungle, has never been confronted with a prison crisis of such magnitude. A series of riots and clashes erupted simultaneously on Tuesday between gangs vying for control of prisons in Guayaquil, Cuenca and Latacunga, cities which concentrate 70% of the prison population.

A new mutiny began on Wednesday evening in one of Guayaquil’s prisons, police chief General Patricio Carrillo said. He did not give any indication of possible victims, but spoke on Twitter “the aggressiveness and irrationality of groups of delinquents”.

Hours later, the Ecuadorian prison administration, SNAI, declared that the “incidents” that took place in the evening in this Guayaquil prison had been “controlled” by guards, police and soldiers. The SNAI also did not indicate whether these new incidents had caused casualties.

It is an “unprecedented massacre” which took place on Tuesday, deplored the Defender of the People, a public entity responsible for the protection of human rights. The latest assessment was established Wednesday at 79 dead: 37 in Guayaquil, 34 in Cuenca and eight in Latacunga, according to the director of the penitentiary system (SNAI), Edmundo Moncayo.

Third city of Ecuador, with 600,000 inhabitants, Cuenca was at the height of horror at the revelations of the local prosecutor Leonardo Amoroso: “About 18 corpses were beheaded and we even tried to burn some”.

A coordinated attack by a gang of drug traffickers

The government attributed the violence to a coordinated attack by a gang of drug traffickers to eliminate a rival gang. ” It is not a coincidence. This was organized from outside the prisons and orchestrated internally by those who fight for control, as well as drug trafficking throughout the national territory, ”added President Moreno.

In front of Tori’s prison, Digna Pacho despairs of recovering the remains of her 33-year-old son. Jackson España, alias “El Chato”, had been transferred from the coastal town of Esmeraldas to Cuenca, in order to serve an extended sentence there to 35 years for an assassination during a prison mutiny.

This 63-year-old woman traveled fourteen hours. Sitting on the sidewalk, shivering with cold, she said her son called his lawyer Tuesday because “we were going to kill him”. “I just want to get Jackson’s body and go back to Esmeraldas,” she adds. Other relatives of detainees prefer to remain silent.

Ana Arpi, a street food vendor, claims to have never seen anything like Tuesday: “People in despair, prisoners on the terrace, shots fired in all directions, screams”. Some visiting people, she adds, fled in “panic because they were going to be killed. It was madness! “

Faced with the crisis, President Moreno ordered a reinforcement of the army to carry out “control of weapons, explosives and ammunition around the penitentiary centers 24 hours a day and for as long as necessary”.

The United Nations office in Ecuador called on Wednesday for “a swift and impartial investigation” and called for “punishing those responsible and managing the crisis in accordance with the rules of the Constitution and international human rights instruments”.

The authorities have claimed to have regained control of the prisons. In one of the operations following the clashes in Guayaquil, “guns, knives, machetes, cell phones and drugs were seized,” local prosecutor Carlos Vaca said. “Weapons were used in assaults between detainees,” he added.

Ecuador has about 60 penitentiary centers with a capacity of 29,000 places. But overcrowding is around 30%: 38,000 detainees, watched by 1,500 guards while, according to experts, it would take 4,000 for effective control. The government tried last year to contain prison violence by decreeing a three-month state of emergency in order to be able to deploy soldiers as reinforcements.

According to the Ombudsman, there were “103 assassinations” in Ecuadorian prisons in 2020.