Videosurveillance, “bodycams”… Unpublished images of the drama unveiled at the trial of Derek Chauvin 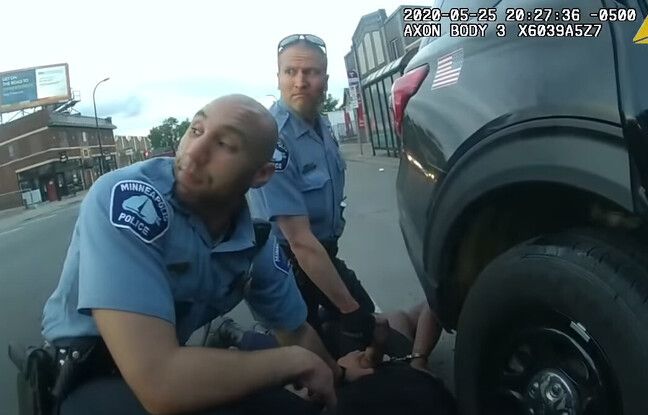 It is 7:45 pm on May 25, 2020. It is Memorial Day, a public holiday that marks the start of summer aperitifs and barbecues. In Minneapolis, it is still close to 25 °. Inside the Cup Foods grocery store, George Floyd is smiling. He chats with an employee and bursts out laughing. He puts his arm around the shoulders of a friend. Nothing suggests that 45 minutes later, he will lose consciousness below Derek Chauvin’s knee and will be declared dead in the process.

On the third day of the ex-policeman’s trial, Wednesday, the 12 jurors were able to see unseen images filmed inside the grocery store, and thus better understand the course of the tragedy. Once again, they witnessed the agony of the African-American forties filmed from all angles by the bodycams police officers. Except by that of Derek Chauvin.

A drama triggered by a fake banknote

On Wednesday, a young grocery store cashier, Christopher Martin, was called to the bar. He said he noticed George Floyd and his 6’3 ”. He exchanged a few words with him and found him “sympathetic”. To pull the rug out from under the defense, the prosecutor asked him to reconsider his testimony, in which he pointed out that George Floyd looked “ high “. “He took a little time to find his words and answer”, details the cashier, 19 years old, acknowledging that he had “no difficulty” to understand him, and that that evening, many people had partied.

George Floyd buys a pack of cigarettes which he pays for with a 20 dollar bill and then leaves the shop. Christopher Martin notices a suspicious “bluish tint” and holds up the note to look at it in the light. In the grocery store, the rule is strict: a counterfeit bill cashed is withheld from the cashier’s salary. The young man thinks first to put it on his note then, “after reflection”, changes his mind and warns his manager. The latter asks him to go talk to George Floyd, behind the wheel of a car parked at the corner of the street. Martin complies, then a second colleague tries his luck. But Floyd refuses to return to the store. The manager then tells another employee to call the police. At the helm, Christopher Martin confides being haunted by his choice: “If I had not taken the ticket, all of this could have been avoided. “

An agony filmed from all angles, except that of Chauvin

After Christopher Martin, it is Charles Williams who testifies. This 60-year-old is one of the passers-by who attended the arrest of George Floyd and advised him “not to resist”. After reviewing the footage of Floyd calling his “ mama »(Deceased in 2018) before losing consciousness, Williams bursts into tears – like almost all witnesses. “I lost my mom (last June),” he explains.

Almost everyone who witnesses George Floyd’s death mourns at one point on the stand as they review the footage, with rekindled trauma. Here to see Floyd calling his deceased mother in her last moments. “I don’t have a mama either” said Charles McMillian in tears. #ChauvinTrial pic.twitter.com/H5LcpzLqb7

These images of the arrest, made public in August 2020 but rarely seen in full by the general public, the jurors had to endure them for more than an hour. They re-examined the scene of about twenty minutes from three angles filmed by the bodycams officers Kueng, Lane and Thao – who will be tried in August for “complicity in murder”.

We first see Thomas Lane take out his gun less than 10 seconds after knocking on the door. George Floyd is restless – a point the defense is sure to stress, as is the presence of fentanyl and methamphetamine in his body. “Don’t shoot”, he pleads, assuring that the police have already shot him in the past. “Did you take something? The agents ask him, who first make him sit on the sidewalk before trying to get him into their patrol vehicle. Floyd resists. He explains to them that he is “claustrophobic”. The police don’t seem to care. One pushes him through the left door, while the second pulls him from the right. Then Derek Chauvin, called in for reinforcement, arrives.

Unprecedented, the video filmed by his camera lasts less than two minutes. Chauvin helps his partner get George Floyd out of the police car through the right door. For a brief moment, he grabs Floyd by the neck. In the commotion, his camera, fixed by a magnet to his chest, ends up on the pavement. On the images, impossible to know if it is an accident or a voluntary act.

The sequel, filmed by the cameras of his colleagues, is known but no less unbearable. Derek Chauvin immobilizes George Floyd, knee to neck, for 9 minutes and 29 seconds. His two colleagues are leaning on his back and his legs. Floyd yells “I can’t breathe” 27 times.