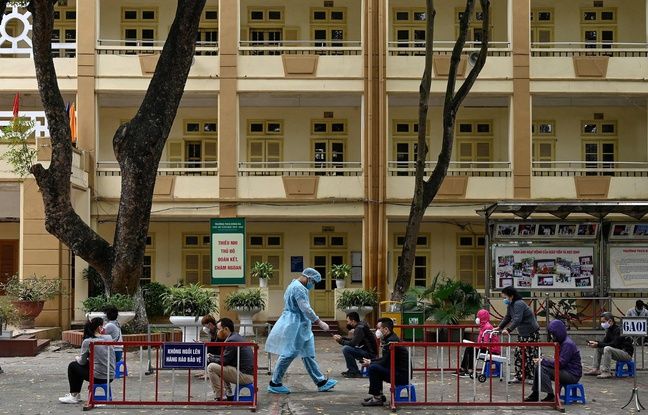 One more. Vietnam has discovered a new variant of the Covid-19 virus, which is transmitted quickly through the air, and is a combination of the Indian and British variants, state media reported on Saturday.

The news came as the country faces a new wave of contaminations in more than half of its territory, including industrial zones and major cities, including Hanoi and Ho Chi Minh City. Vietnam had until recently been very little affected by the coronavirus. The majority of the 6,700 reported cases and 47 deaths have been recorded since April.

A variant that “is transmitted rapidly through the air”

“We have discovered a hybrid variant combining the Indian and British virus,” Health Minister Nguyen Thanh Long said at a national meeting on the pandemic on Saturday.

“The main characteristic of this virus is that it spreads quickly through the air. The concentration of the virus in the throat and saliva increases rapidly, and it spreads very quickly in the surrounding environment, ”he explained.

He did not specify the number of cases attributable to the new variant, whose characteristics will be released soon, he said, to add it to the map of variants around the world.

There were before this announcement seven different variants in Vietnam, according to the Ministry of Health.

Just over a million people vaccinated in Vietnam

The communist country was applauded last year for its vigorous response to the virus, with mass quarantines and a strict system of tracing and isolation.

But the current wave of infections worries the population, and the authorities have responded by severely limiting movement and activity. Cafés, restaurants, hairdressing or massage salons, as well as tourist or religious sites have been closed in several regions of the country.

Vietnam, which has a population of 97 million, has so far vaccinated just over a million people, but is seeking to increase the rate of vaccination, and authorities hope to achieve herd immunity by the end of the year.