Violence in Leipzig during protest against restrictions 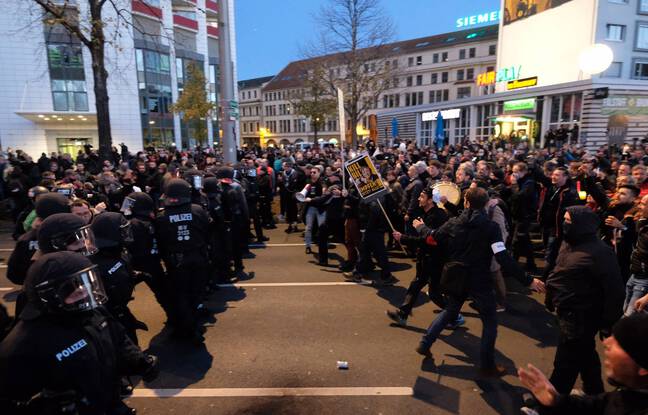 Demonstrations against the restrictions put in place to combat the spread of the coronavirus are increasingly tense in Germany. Violence thus broke out on Saturday in Leipzig between the police and “anti-mask” demonstrators. The police had deployed en masse in the city center where some 20,000 people gathered.

The police also indicated that they had made “arrests” without further details. Previously, the police had assured that there had been “many attacks” against the police, evoking the throwing of “objects” and “fireworks” while the media broadcast images of jets. of projectiles. Protesters also forced a cordon of security forces near Leipzig central station.

In order to prevent overflows, the police ordered at the end of the afternoon the dissolution of the demonstrators because “90% of them” did not wear a mask and did not respect the required distance of 1.50 m between two people. , according to police spokesman Olaf Hoppe. The municipality of Leipzig had also denounced “breaches of the conditions” decreed to authorize the holding of this demonstration.

Some people, who responded to the call of a motley collective posing as “free thinkers”, attacked journalists and counter-demonstrators who had also planned to march in the center of this great city. student, stronghold of the radical left movement and anarchist. But ignoring the dispersal orders, hundreds of people marched on one of Leipzig’s main arteries with cries of “Merkel must go!” “And” peace, freedom, no dictatorship “.

“There is no virus”

These opponents of health measures include anti-vaccine activists, conspirators or even far-right sympathizers. “For me there is no virus, they take the coronavirus crisis as a reason but there are other things behind”, thus assured a protester, Anne, 65 years old. Another, Robert Köhn, 39, insisted that the measures taken by the government were “disproportionate”. “I just see the collateral damage that these measures cause: the isolation of people, the bankruptcy that threatens them,” he confided.

Saxony, the regional state in which Leipzig is located, is a stronghold of the far right which has achieved its best scores for several years. The organizers, already at the origin of several rallies in Berlin, have been in the crosshairs of the authorities since at the end of August, several hundred demonstrators had forced security barriers to climb the steps of the seat of the Chamber of Deputies.