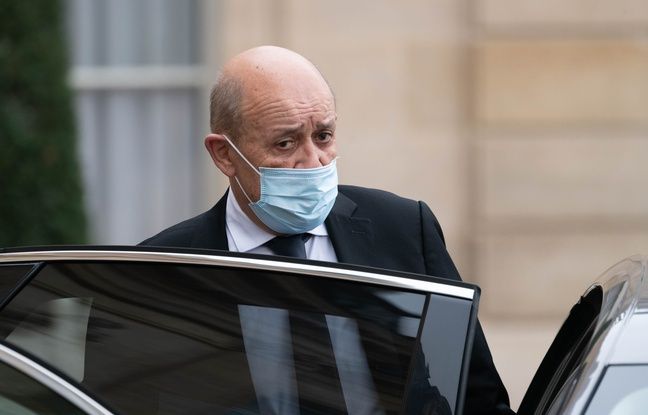 On an official visit to Cairo, French Foreign Minister Jean-Yves Le Drian pleaded for appeasement on Sunday. He assured the Muslim world of respect for France, despite “differences” with the Sunni institution Al-Azhar over the cartoons of the Prophet Muhammad.

“I recalled and here I recall the deep respect we have for Islam,” said the French minister during a press conference. “What we are fighting is terrorism, it is the hijacking of religion, it is extremism”, he added, assuring that he came “to explain, if necessary, this fight” as well as “the fight [pour le] respect for the freedom to believe ”.

The minister met for two and a half hours with Egyptian President Abdel Fattah al-Sisi. He then held a meeting with his counterpart Sameh Choukry. His visit comes shortly after the outbreak of a controversy over the publication of cartoons of the Prophet Muhammad.

Portraits of Macron burned in some Muslim countries

French President Emmanuel Macron had defended the freedom to caricature, promising not to “renounce caricatures”, during a national tribute to Professor Samuel Paty, beheaded by an Islamist on October 16, for showing caricatures of the prophet. In some predominantly Muslim countries, worshipers have reacted angrily to the words of Emmanuel Macron, whose portraits were burnt during demonstrations and a campaign was launched to boycott French products.

Jean-Yves Le Drian also met the grand imam of Al-Azhar, Ahmed al-Tayeb, who had strongly criticized France shortly after Emmanuel Macron’s remarks, by equating the position of Paris with a “call to hatred “. At the beginning of October already, Al-Azhar had deemed “racist” the speech of the French president against “Islamist separatism”. On Sunday, Tayeb reiterated his criticism of the French position in defense of freedom of expression.

“Many points of difference” with the grand imam

“Insulting the prophet is completely unacceptable and we will prosecute anyone who disrespects our prophet in international courts,” the religious institution wrote in a statement on the occasion of the French minister’s visit.

The latter admitted at the end of the interview to have “noted many points of divergence”. “The Grand Imam proposed to work together for this common convergence (…) because it is together that we must fight fanaticism”, he added.

President Sissi had simply defended, in a speech on the occasion of the birthday of the Prophet Muhammad on October 28, “religious values” rejecting “insults to the prophet”.

In addition, the French minister also referred to the Libyan dossier during his talks on Sunday. “The developments in recent weeks are going in the right direction,” he said, referring to the ceasefire agreement in Libya signed on October 23 and the organization of the inter-Libyan political dialogue.

Relations are in good shape between Paris and Cairo, where Le Drian is making his 19th ministerial visit since 2012. The minister first went there as Minister of Defense, then nine times as head of French diplomacy.

Jean-Yves Le Drian must then travel to Morocco, where he will meet on Monday with several senior officials of the kingdom.