Wave of arrests against a backdrop of power struggles 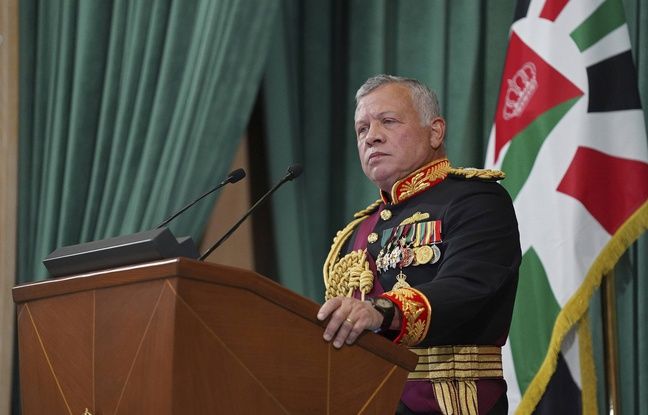 Jordanian authorities have promised to provide more explanations on Sunday, in the wake of a wave of arrests for “security reasons”, in particular of relatives of the royal family, a state newspaper warning that the “stability” of the kingdom constituted a “red line” not to be crossed. The half-brother of King Abdullah II of Jordan, Prince Hamza, told him on Saturday that he had been “under house arrest” in his palace in Amman, after being accused by the army of activities against “the security of the kingdom” .

In a video transmitted to the BBC by his lawyer, the Jordanian prince claimed that the army chief of staff came to his home and told him that he was “not allowed to go out. “. He denied having taken part in a conspiracy and accused the authorities of his country of “corruption” and “incompetence”. Aged 41, Hamza is the last son of King Hussein, born of a fourth and final marriage to Queen Noor, of American origin. In accordance with the wishes of his father, who died in 1999, he was appointed crown prince when Abdullah II became king. But in 2004, the latter had withdrawn his title to give it to his eldest son Hussein.

No comments yet from the palace

In a statement, the Jordanian chief of staff, General Youssef Huneiti, had specified that Prince Hamza had been “called to stop activities that could be used to undermine the stability and security of the kingdom”, but had denied his arrest. According to a Jordanian analyst who does not want to be identified for security reasons, Prince Hamza had, lately, “multiplied in front of his circle of friends the criticisms against what he described as corruption within the power” . According to this same source, “there is certainly resentment on his part, because he has never digested to have lost his title of crown prince”, more than fifteen years ago.

The turmoil has yet to be commented on by the Jordanian royal palace, but a government source told official Al-Mamlaka TV station on Sunday that a truth-clarifying statement would be released within hours by authorities. concerned. The only state media to comment on the event, Al-Rai said on Sunday that the kingdom’s best interests, security and stability were “a red line” not to be crossed.

“The security operation yesterday (Saturday) is the expression of a red line that does not allow to be crossed when it comes to the superior interests of the kingdom, its security and its stability”, writes the newspaper in a. “Some people are trying to imagine a coup attempt in Jordan, and they are trying to involve Prince Hamza”, continues Al Rai. For the newspaper, “certain acts of the prince (Hamza) were knowingly used to undermine the security and the stability of Jordan”.

The Kingdom of Jordan is due to celebrate its 100th anniversary on April 11. The Gulf monarchies, important partners of Jordan, a small country devoid of natural resources and largely dependent on foreign aid, unanimously united behind the Jordanian sovereign by giving their full support to his power, in separate declarations.