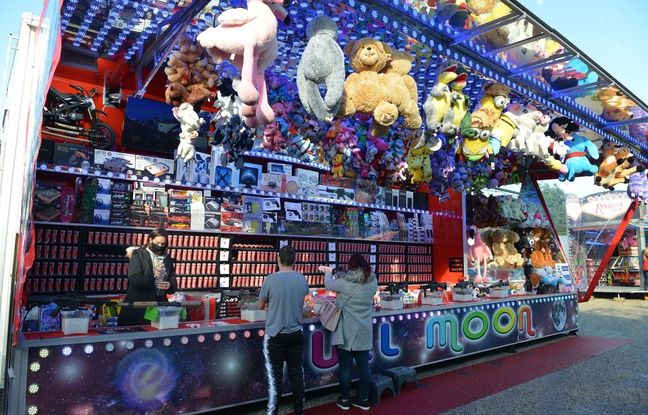 Bad weather for duck fishing and laughing palaces. Since the end of October 2020, funfairs have been completely banned in France, due to the coronavirus epidemic. A situation that has not changed with the deconfinement, since a decree dated December 14 maintained their closure. Latest disappointment to date: the ban, by the administrative court of Dijon, of the funfair planned in Chalon-sur-Saône from this weekend.

The fairgrounds, like many other professions affected by the crisis, are waiting for better days. “We would like the small and medium-sized funfairs (up to 100 rides) to be able to reopen at the same time as amusement parks and cinemas, advances Norman Bruch, vice-president of the French federation of fairgrounds. We are waiting for a positive signal ”.

“You have to give yourself a horizon, otherwise it’s too difficult”

It must be said that the year 2020 has left its mark on finances and morale. “Last year, I had two parties, against twenty usually”, testifies Karl Toquard, president of the association for the defense of fairgrounds and circus artists. Its caterpillar and waffle stand did not see many visitors, as its turnover was down 95% compared to a normal year. “It was a real blow, and financially, it’s complicated,” he admits.

The fairgrounds had to wait until November 2020 before being registered by the government in the “S1” list, alongside restaurateurs and professions linked to tourism. Previously, they had to be content with aid capped at 1,500 euros per month. With this change, they were able to benefit from additional support measures (exemption from charges, aid in proportion to turnover). “This allowed me to pay the insurance for my ride,” explains Norman Bruch. Afterwards, it will not make up for all that we have lost ”. In addition, “many fairgrounds have not completed recognized training and do not have a diploma. So it’s difficult for them to find another job while waiting for the resumption ”.

“We have no choice, we have to wait,” continues Karl Morel, a fairground based in Normandy. He could only work two full months in 2020, before having to put away his stuffed animals and bumper cars. Since the ban on fairgrounds, he has been forced to stop and takes his troubles patiently in his caravan. “I want to believe that in May, it will be possible to get back on the road. In any case, you have to give yourself a horizon, otherwise it’s too difficult to maintain morally. We are used to living in a party atmosphere, but everything has been gone for months ”.

In order to put all the chances on its side and convince the town halls and prefectures, the profession says it is ready to respect a strict health protocol. “Wearing a mask is obviously compulsory on the rides, which are disinfected at each turn”, details Karl Morel. Other measures, such as setting up a maximum gauge per attraction, are also being studied.

“The alleys of a fun fair should be considered as a pedestrian street,” says Norman Bruch. “I am a trader,” abounds Karl Morel. I don’t see why I couldn’t compare myself to a store in a city center, with the same rules and the same rights ”. Fairgrounds are therefore open to compromise, but not at any cost.

“If we stay on a maximum tonnage of 1,000 people, the small fairgrounds with about twenty rides will be able to get by financially, details Karl Toquard. But if you take an event like the Foire du Trône in Paris [avec un pic de 180.000 personnes les week-ends], it will never be profitable with so few people. Discussions are also underway with the public authorities for the postponement of this event, which normally starts at the end of March.

The fairgrounds are therefore waiting, like many, for the arrival of fine weather and the acceleration of the vaccination campaign to be able to set up their rides again. “We represent a form of popular culture, argues Karl Toquard. Anyone can come for a walk, spend a little money on attractions, even if they don’t have a big salary. Also, many people who go to fairgrounds cannot go on vacation. So for them, it’s an important hobby ”.