“We will come back to Strasbourg soon”, promises President David Sassoli 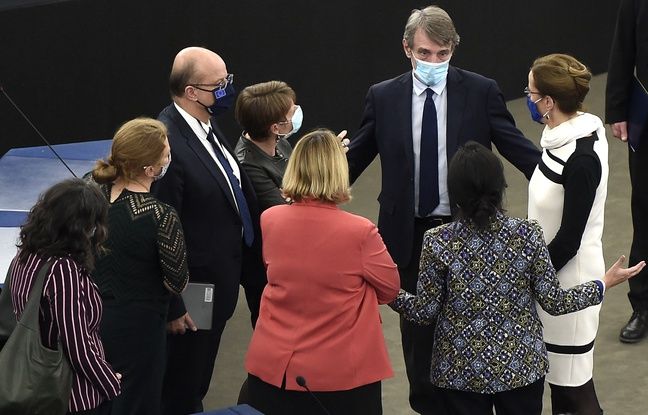 About ten seats filled on the 705 of the hemicycle and a president who speaks from the rostrum. As expected, David Sassoli symbolically opened the session of the European Parliament in Strasbourg on Monday. This had not happened since March, the date of the last arrival of MEPs in the Alsatian capital.

“We will return quickly to Strasbourg, it is our home, it is written into the treaties, but also in the history of the European Union”, declared the Italian, to mark a symbolic support for the official seat of the institution, deserted since the start of the pandemic. “It is our common desire to hold our plenary sessions again in this hemicycle as soon as possible,” he insisted. “I come here as a sign of friendship, as a sign of proximity to the city of Strasbourg, in these very difficult months of the fight against a pandemic”, he had previously explained to the press. David Sassoli then returned to Brussels, where the rest of this plenary session takes place, which MEPs can also follow remotely.

Most of the work is done in Brussels

The official seat of the European Parliament is established in Strasbourg by the European treaties, a modification of which would require the unanimity of the member states. But in fact, most of the parliamentary work takes place in Brussels, where the “EP” has another building which also has a hemicycle.

MEPs travel to Strasbourg once a month for plenary sessions lasting three and a half days during which they debate and vote on the texts. However, since March, no plenary session has taken place in the Alsatian capital due to the pandemic, bringing water to the mill of the many MEPs who wish to focus their activity exclusively on Brussels.

Among those who on the contrary defend tooth and nail the Strasbourg headquarters, Anne Sander (LR) took the arrival of David Sassoli “as something very positive”, a “symbol”. But for the centrist Christophe Grudler, it was “a pantalonnade”, David Sassoli not having called on MEPs to join him.

For her part, the mayor (EELV) of Strasbourg Jeanne Barseghian welcomed “a positive signal (…) and a commitment to” her city after an interview with David Sassoli in the premises of the European Parliament. “Its commitment is there, it is still of course that this first signal is reinforced”, she observed, however, hoping for a return of MEPs to Strasbourg “from the beginning of next year”. A next meeting in the hemicycle is already scheduled for February 2, with a tribute ceremony to former President Valéry Giscard d’Estaing announced by Emmanuel Macron.

The French state should also sign, in January or February, with local authorities, the new three-year contract 2021-2023 of “Strasbourg, European capital”. This contract, which the State has promised to increase at least to the same level as the previous one, aims to strengthen the European influence of the city which also hosts the Council of Europe, a pan-European organization for the defense of democracy, and its judicial arm, the European Court of Human Rights (ECHR).

#Strasbourg | ” At home ! “
Thank you @EP_President of your presence today. We are working on the rapid return of sessions of the European Parliament to its headquarters. We need a Europe proud of its history and looking to the future. Strasbourg is its embodiment 🇪🇺🇫🇷 pic.twitter.com/clYqMr7y69

“The commitment to Strasbourg must continue, we will do so until the return of the plenary sessions, but that goes beyond”, considered Clément Beaune, the French Secretary of State in charge of European Affairs, evoking “a fight, European and friendly ”before meeting David Sassoli. France intends to highlight the Alsatian capital during its presidency of the European Union in the first half of 2022 and hopes to host events linked to the future conference for the future of Europe.