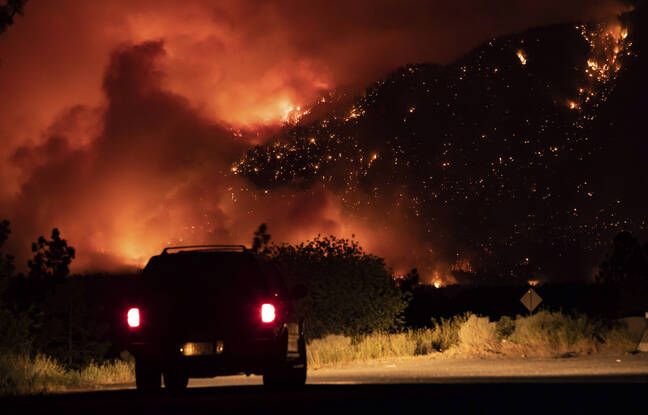 A thousand people were evacuated Thursday in British Columbia, in western Canada, due to the fierce fires currently affecting the country. Experts estimate that this heat wave, which triggered heatwave alerts in areas where millions of people live and killed nearly 500 in Canada and at least 16 in the United States, was caused by global warming climate.

The village of Lytton, some 250 km northeast of Vancouver, now famous for having this week set a national heat record of 49.6 ° Celsius, has been almost completely destroyed in a wildfire. The 250 residents were evacuated Wednesday evening due to a fire that spread very quickly. The evacuation order was then extended, overnight Wednesday to Thursday, to residents of a hundred properties north of Lytton. “90% of the village is burned, including the city center,” said early Thursday Brad Vis, deputy for the constituency, on Facebook.

British Columbia has recorded 62 new fires in the past 24 hours, Premier John Horgan said at a press briefing Thursday. “I can only stress that the risk of fire is currently extreme in almost all parts of British Columbia and I urge British Columbians to listen carefully to authorities and follow directions,” he said. he pointed out.

John Horgan said he requested reinforcements from Justin Trudeau’s federal government. “The past 24 hours have been devastating for the residents of Lytton. Our @ ForcesCanada [Forces armées canadiennes] are ready to help residents, ”Canadian Defense Minister Harjit Sajjan confirmed on Twitter. Provincial authorities have not yet announced any injuries or deaths related to these fires, which were recorded in particular north of the city of Kamloops, located 350 km northeast of Vancouver.

“The duration of this heat wave is worrying”

In late Thursday afternoon, the British Columbia Fire Department said it expected “another very difficult day with wildfires” due to “unprecedented hot and dry conditions. encountered during the last few days ”. “The duration of this heatwave is worrying, because there is little respite from the heat at night due to the high night temperatures”, for its part indicated Environment Canada, in a bulletin published early Thursday morning, for the region of Prince George, British Columbia.

On Thursday, the heat wave continued to move eastward across the prairies of central Canada. In addition to British Columbia, heat wave warnings have been issued for the provinces of Alberta, Saskatchewan, Manitoba, as well as part of the Northwest Territories, and now northern Ontario.

The US states of Washington and Oregon, across the border, also suffocated this week in record temperatures. In northern California, authorities have called for the evacuation of large swathes of a county where a major fire burned some 20,000 acres, and was only 20% under control on Friday, local officials said.

The fire has been raging for a week, after being started by lightning, a government fire alarm service said. Images of the area showed hills and forests on fire and the sky filled with smoke, as firefighters attempted to put out the flames. A dozen different fires have been reported across California, which was affected by some of the worst wildfires in its history last year.