What are the alternative routes for world trade? 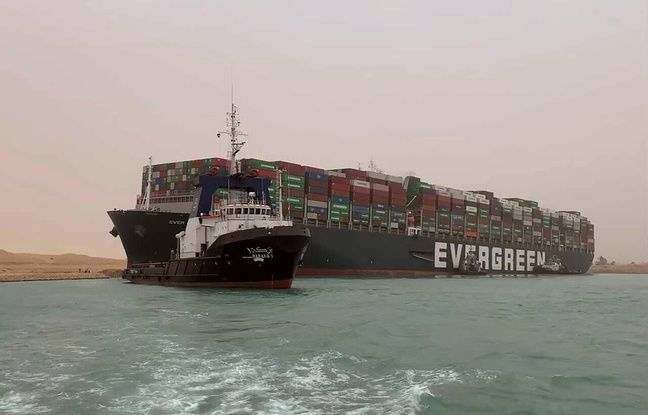 Even Smart Bison hadn’t seen it coming. Since Tuesday evening, a giant traffic jam has formed in the Suez Canal, a vital maritime artery of globalization, which normally records 19,000 annual ship passages. A giant container ship, 400 meters long, got in the way and completely blocked navigation. While the experts are struggling to agree on the time needed to clear the boat, 20 Minutes took out his map and studied the other possible routes between Asia and Europe.

Where do we go then?

If the Suez Canal remains blocked for a long time, container ships arriving from major ports in Asia (Singapore, Hong Kong) and which are located off the coast of Africa will have no choice. It will be necessary to take the direction of the South, to go around the continent, passing by the Cape of Good Hope. The Danish Maersk, the largest shipowner in the world, and the German Hapag-Lloyd announced on Thursday that they were studying this possibility.

For goods that have not yet left Asia, and especially China, other options are possible. “You can go through the Panama Canal (Central America), or use rail freight,” says Paul Tourret, director of the Higher Institute of Maritime Economy (Isemar). Certain companies like Decathlon have also made this choice of the train for several years. The last maritime solution, still little exploited today, remains the “northern route”, along the northern coasts of Russia. Finally, companies in a hurry can always charter planes.

Alternatives to the Suez Canal by 20 Minutes

Why can it be complicated?

As often, it’s all about money and / or time. Compared to bypassing Africa, the Suez Canal is preferred because it saves 6,000 kilometers of journey (one to two weeks of navigation) and as much fuel. “Nevertheless, you will not have to pay the price of the channel, so it will not necessarily be more expensive,” notes Paul Tourret. The “toll” can indeed exceed $ 500,000 for larger ships.

Regarding rail transport between China and Europe, via Russia, this is the fastest way (around twenty days depending on the destination, or 10 to 20 days less than by boat). “The constraint here will be the capacity of rail freight”, explains Paul Tourret. Indeed, at present, the train represents only 1.6% of container flows between Europe and Asia. Shifting into high gear would therefore require increasing the number of trains and convoys.

As for the “route du Nord”, it is shorter… only in certain cases. “Polar routes are only really interesting in terms of distance if the planned transits are made from North China and South Korea to the ports of Northern Europe. For container traffic from Singapore, one of the largest ports in the world, to the Mediterranean, transit through the Suez Canal remains the shortest ”, explains in a long analysis Hervé Baudu, professor of nautical sciences at the National Maritime School of Marseille.

In addition, still passing through the North, the time savings (approximately 30% less compared to the journey via Suez) “are only valid for a period of less ice, from 3 to 4 months of the year only” . The rest of the time, passage is indeed almost impossible without a specialized vessel (icebreaker). Finally, concerning transport by plane, “it will take around 25 euros per kilo of goods, against 5 euros for transport by container,” recalls Paul Tourret. A significant additional cost.

Could the stranding of the container ship push the companies to abandon the Suez Canal in the long term?

As we have said, the choice of route depends on the distance, but also on the price. In 2016, when fuel prices were low, several container ship owners decided to shun the Suez Canal, whose tolls were deemed too expensive. They preferred to bypass Africa, a longer journey which however allowed them to save tens of thousands of euros.

It is in particular for this reason that the Egyptian authorities then decided to grant large reductions in tariffs, to attract the barge. The same policy was relaunched in early 2020, with discounts of up to -75% for certain vessels. It must be said that Egypt has an interest in keeping its channel attractive, the latter bringing in about 6 billion dollars per year to the country. When it is not blocked.