What are these anti-French demonstrations taking place in the country? 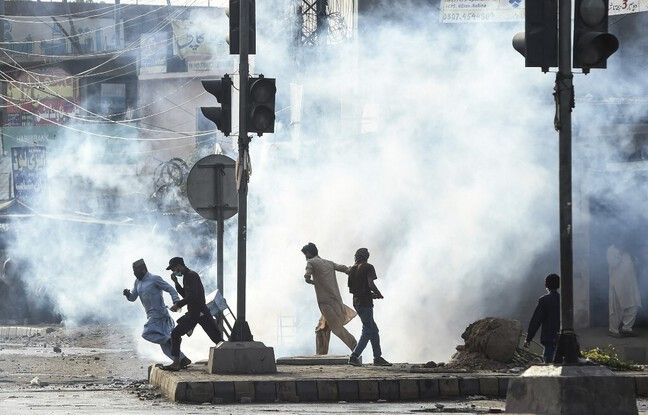 The threat is “serious” for the French in Pakistan, estimates the Quai-d’Orsay. They are outright asked to temporarily leave the country. In question, anti-French demonstrations, dense and sometimes violent, which take place in several large cities of the country for a few days. There had already been some at the time of the republication of the cartoons of Muhammad by Charlie Hebdo, at the start of the last school year. But why again today. 20 Minutes explains to you.

What are these demonstrations?

Anti-French demonstrations in Muslim countries in reaction to the publication of cartoons of Muhammad or the passage of certain laws, this is not very new. This time, they were born in September after the republication of the Prophet cartoons by Charlie Hebdo. Emmanuel Macron then defended the freedom to blaspheme and caricature. He had once again hammered it after the assassination of Samuel Paty in October 2020. There were demonstrations, calls for a boycott in Pakistan “but also in Iran, Bangladesh, Afghanistan”, lists with 20 Minutes Karim Pakzad, Associate Researcher at Iris. What is special is of course that these demonstrations continue, six months later.

“Pakistan is a country which was founded on religion”, recalls the specialist. Pakistan was indeed founded in 1947, during the partition of British India, from provinces with a Muslim majority, the others, with a Hindu majority, forming neighboring India. “Apart from Saudi Arabia, which claims to be the guardian of the holy places, this is not the case for the founding of most other Muslim countries,” notes Karim Pakzad. Thus, Islamist movements or parties have always had an important weight in Pakistani politics.

Who is organizing this movement?

It is a small fundamentalist Islamist party that is in the driver’s seat: Tehreek-e-Labbaik Pakistan (TLP). It was founded only in 2015 by a religious, Khadim Hussain Rizvi. Seen from France, the demonstrations, sometimes violent and provided, organized by this party have something to impress. But Karim Pakzad puts them into perspective: “We must not forget that Pakistan is a country of almost 200 million inhabitants, bringing together a crowd in the street on such a subject is not very difficult. And TLP is only a party with a small audience: less than 5% and no deputy in the last legislative elections.

The TLP is also isolated: the other, more important Islamist parties, sometimes join the anti-French declarations, but usually do not go much further. What is happening is in fact for many a Pakistani-Pakistani political affair. “The founder of the TLP died a few weeks after the attack on Samuel Paty,” explains Karim Pakzad. His son, Saad Hussain Rizvi, succeeded him at the head of the party. He uses these events to legitimize himself. It is a blessing for him. “

What is the Pakistani government doing?

He first tried to cheat with TLP, promising him a vote in the local National Assembly on the dismissal of the French ambassador to Islamabad, the party’s main demand. Vote which also had no real chance of success, believes Karim Pakzad. However, the head of government did not keep his promise, which made the TLP demonstrations start again. Since then, the government has chosen the hard way: demonstrations are violently repressed and Saad Hussain Rizvi has been arrested. The dissolution of the party has even been requested, “but it must be confirmed by the Supreme Court”, specifies Karim Pakzad.

The specialist also thinks that the TLP will not really be able to recover from the blows given by the government: “Pakistan is a great military power, one cannot imagine that a movement organized by a small isolated party in a huge country can bend the government, which is well established. He proved it again this Friday morning, when social networks were suspended across the country, to avoid calls to rally at the end of Friday prayers.

What can France do?

Paris is urging its nationals to leave the country, but there is little more that can be done. Karim Kakzad would even be tempted to say that she should not do more: “France could only repeat for the umpteenth time that it is a secular country, where blasphemy is not recognized by law, but we know very well. although this is a reasoning that does not pass everywhere, in the Muslim world in particular. The risk would be not only to add fuel to the fire in Pakistan, where the situation is tense, but potentially elsewhere as well, in countries where demonstrations were organized in the fall.