What future for the Hirak, two years after the start of the movement? 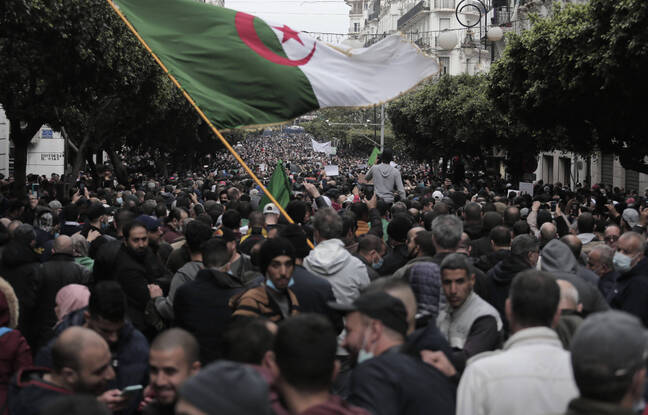 The demonstrations in Algeria of the Hirak movement had pushed President Abdelaziz Bouteflika – in power for two decades – to resign on April 2, 2019. This Monday, two years after day to day after the start of the movement, on February 22, 2019, thousands of Algerians reinvested the streets, in the center of Algiers and in the rest of the country. The largest procession in the capital since the suspension of the Hirak marches on March 13, 2020 due to the coronavirus pandemic.

But the demonstrators were very clear, this march was not just a simple commemoration of date. One of the most sung slogans was even: “We did not come for the anniversary. [du Hirak], we have come for you to go ”. Enough to dispel any doubt: whatever the past, this is about the future.

For Saad Khiari, associate researcher at the Institute of International and Strategic Relations (IRIS) and specialist in Algeria, there was no doubt that the movement would return “given the political situation in Algeria and in particular the deterioration of the economy, the lack of visibility and attacks on freedom of expression, and above all the promises not kept by the authorities after the presidential election ”. If President Abdelaziz Bouteflika has resigned, the demonstrators demand the end of all the leaders of the old power – many of whom make up the current government -, less corruption and a profound change in the political system in place towards more democracy .

Can they do it? Khadija Mohsen-Finan, researcher associated with IRIS and specialist in the Maghreb sees in the short term a coexistence between power and movement, each being too strong to give way to the other. Faced with a movement that it cannot destroy directly, the government will play time, predicts the researcher, which it has already done these first two years hoping that by force the demonstrators will disperse on their own or divide between them.

A strategy favored by the lack of clarity or general direction of Hirak, as Saad Khiari reminds us: “It is a spontaneous movement, without any particular ideology and without an appointed historical leader. “What to hope for the disappointment of the people. “The power in place always tries to play the rot, by various means, so that the public opinion disappointed by the lack of expected results, ends up attributing the failure of the movement to internal divisions or the lack of maturity. policy of its leaders. “

A strategy not necessarily the most effective, but the government lacks a card in its game. Khadija Mohsen-Finan: “The State can no longer play on the fight for independence, nor on the purchase of clientelism due to the fall in the price of oil, and Algeria has lost its regional and international weight. “In this case, the government does not seem able to meet the democratic expectations or the economic demands of the people, supports the expert.

But the class in power will not be that easy to dislodge. The expert draws up the inventory. “It’s been there for a long time, the military is in favor, and part of the people fear protests and uncertain change more than the status quo. “

A possibility of renewal anyway?

So, can the Hirak make it happen? For Saad Khiari, there is no doubt: “The Hirak can achieve these objectives, if it does not give in to the inevitable enterprises of seduction and divisions that the current power will inevitably try to put in place. “Khadija Mohsen-Finan pleads for better organization and the establishment of a real alternative project to that of the government,” which can meet the expectations of the population. If the Hirak manages to present a real organization and a better project than that of the government, then it will win. “

Of course, such a change will take time, but the two experts are convinced that demonstrations will soon follow other modes of expression and peaceful struggles. “I think that a movement of such spontaneity, which manages to peacefully mobilize the whole country around legitimate demands is doomed to succeed and to endure,” enthuses Saad Khiari. And time, far from being the government’s back-up solution, could even turn in favor of a Hirak who would gradually come to maturity.