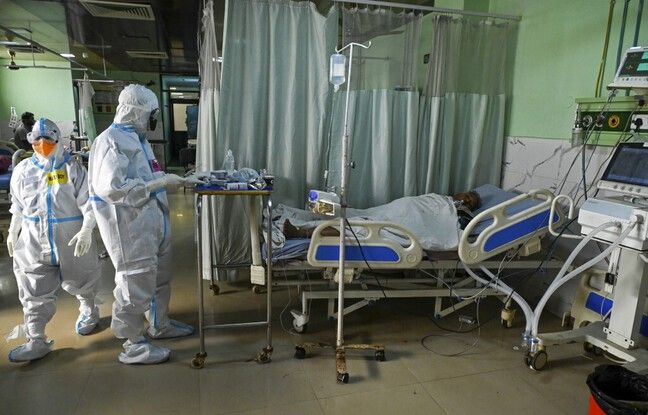 As India faces a violent second wave of the coronavirus epidemic, with 262,317 deaths in total, more and more patients are being affected by the ‘black fungus’, a fungal infection called mucormycosis, which can be fatal, according to testimonies from caregivers reported by the BBC.

This infection, which attacks human tissue, seems to particularly affect people with diabetes, but also people who contracted Covid-19 a few weeks earlier. Here is what we know about this “black mushroom”.

Mucormycosis is a fungal infection: fungi, Mucorales, spread and attack human tissues, which undergo heavy damage and end up necrosis. “We call it black fungus because the infected tissues turn black, it’s very spectacular,” explains Professor Guillaume Desoubeaux, head of the medical mycology department at the University Hospital of Tours, at Figaro.

These fungi, which most commonly attack the head – sinuses, nose, eyes, brain – and lungs, are present everywhere, in the air and in the floors, especially in damp, dirty and poorly ventilated places. . “Fungi are everywhere in our environment. They are found on plants, animals, insects… We breathe them daily, ”adds Stéphane Bretagne, head of the parasitology-mycology department at Saint-Louis hospital, with France 24.

In the vast majority of cases, these fungi do not pose a problem. But when the infection develops in a patient, often dramatically, it can be fatal. According to scientists, the death rate is over 50%. Infected patients have several symptoms, such as a stuffy nose, nosebleed, swelling of the eyes, with pain, or blurred vision. Most of the time, if medications are available, the only solution is to operate as quickly as possible to remove all of the affected tissue before the infection hits the brain. “Often, this operation ends with enucleation of the eye, then weeks and weeks of reconstructive surgery,” explains Stéphane Bretagne to our colleagues.

Who are the patients affected by this “black fungus”?

Usually, most of the affected patients are fragile people, often suffering from other diseases, such as diabetes: “These are mainly patients with hematology, chemotherapy or bone marrow transplants, as well as diabetic patients”, according to Prof. Lanternier, a specialist in fungal infections at the Necker-Enfants Malades hospital (AP-HP) and researcher at the National Reference Center for Invasive Mycoses at the Institut Pasteur, cited by Le Figaro.

In India, Dr Akshay Nair, eye surgeon at Sion Hospital in Bombay, told the BBC that he had treated around 40 patients infected with the infection in April, four times more in a single month than in the past two years. The same goes for Bengalore, where Dr Raghuraj Hedge, another eye surgeon, treated 19 cases of mucormycosis in two weeks. And Indian doctors have all observed one thing in common in their patients: they are diabetics and they contracted Covid-19 in the previous weeks.

Is the treatment for the coronavirus responsible for this infection?

According to several specialists, steroids, used as a treatment for patients suffering from Covid-19, could be linked to the increase in cases of mucormycosis. These drugs, which reduce inflammation in the lungs, also decrease immunity: “Diabetes lowers the body’s immune defenses, the body exacerbates it, then the steroids that help fight Covid-19 act as fuel. for fire, ”Dr Akshay Nair told the BBC.

“The Covid-19 causes an immune disruption which, with the addition of corticosteroid treatments, greatly alters the immunity (…) All these parameters can make the bed of a fungal infection”, agrees Professor Guillaume Desoubeaux with the Figaro. Quoted by France 24, Stéphane Bretagne underlines that “there is no direct link between Covid-19 and mucormycosis”. “But all of these elements combined – explosion of Covid-19 cases, large population suffering from diabetes and environmental factors – create an environment conducive to the development of the disease” in India.

This infection was already present in the country, long before the Covid-19 epidemic. It even has the highest incidence rate of mucormycosis in the world, with 140 cases per million inhabitants and nearly three-quarters of the cases reported (71%) worldwide, according to a study published in the specialized journal Journal of Fungi. .