What is this Turkish interference in the presidential election denounced by Macron? 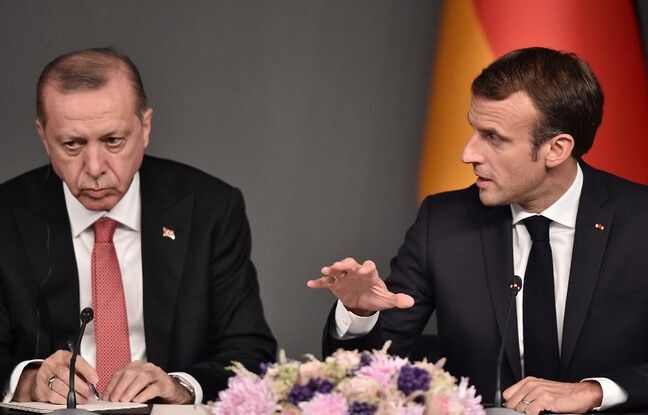 They were already not looking good. But could relations between Turkey and France worsen? It seems so. In question: the declaration of Emmanuel Macron on Tuesday evening, who warned about “attempts to interfere” from Turkey in the next French presidential election in 2022. But what exactly is the French president talking about?

“Obviously. There will be attempts to interfere with the next election. It is written, and the threats are not veiled “, warned the tenant of the Elysee, questioned as part of a documentary of the show C in the Air on France 5. On the Turkish side, the Foreign Ministry reacted on Wednesday via press release: “We find that these statements contrary to the spirit of friendship and alliance are inadmissible”.

Recep Tayyip Erdogan had already been accused of electoral interference, especially in Germany, when he asked German-Turkish voters to vote against Angela Merkel’s party in 2017. This time he is criticized by the French president for its influence on the Turkish community in France, which represents around 800,000 people. “President Macron accuses Turkey of having relations with Turks who are binational or living in France. It is true that Ankara maintains increasingly deep, almost organic relationships with the Turkish community living in France. Macron speaks of interference, Erdogan speaks of a policy of dialogue with his diaspora. There is a problem of definition and vocabulary ”, notes Bayram Balci, researcher at the International Research Center (CERI) of Sciences Po, specialist in Turkey.

“The influence of Turkey in France is not new, even the governments before Erdogan had adopted this strategy, because this community represents a rather important electoral contribution. Erdogan wants to show the diaspora that he is a leader who thinks of Muslims, that he does not forget them. It can annoy France, ”comments for his part Bayram Balci.

For Jean Marcou, professor at Sciences-Po Grenoble who also specializes in Turkey, today we also find the remains of the recent controversy over the sending of Turkish imams to France. “There was a fear of the French government to have politically oriented imams, delegates from the Turkish government.” With his bill on separatism, who had also set fire to the powder, Emmanuel Macron put an end to this practice.

By making this statement Tuesday evening, the Head of State is following “a domestic agenda as the election approaches in 2022. In this regard, he wants to cut the grass under the feet of the National Rally by showing that he deals with potential immigrant community issues in France. It is in this logic, this overbidding ”, estimates Jean Marcou. “I wonder if there is not an element of exaggeration on his part, because the Turks in France are not all subject to Erdogan. They do not constitute a homogeneous electoral force ”, agrees Bayram Balci.

“I want to believe it’s possible”

Electoral strategy or not, this is a new hitch in diplomatic relations between the two countries, already marred by many points of contention. Confusion: the Turkish offensive in October 2019 against the Kurdish forces in Syria, allies of the West, Turkish interventionism in Libya, in the eastern Mediterranean, where another incident between Turkish and French ships in June 2020. “After this In this episode, France did not feel supported by Europe, which did not take any significant sanction against Turkey, trying instead to calm things down in the Mediterranean ”, analyzes Jean Marcou. In particular because Ankara plays a very important role in the management of migratory flows, which is a priority for Germany.

These tensions have risen further since the end of October. At the time, the Turkish president initiated a campaign to boycott French products and violently attacked Emmanuel Macron for defending the right to publish cartoons in the name of freedom of expression. Erdogan accused his French counterpart of leading a “campaign of hatred” against Islam and questioned his “state of mental health”. “Relations between the two countries will eventually normalize, however predicts Jean Marcou. They are old but often inconstant. There are crises regularly. “

Will the future therefore be more peaceful? After accusing the Turkish president, Emmanuel Macron wanted to conclude on a positive note. “I have noted since the beginning of the year Erdogan’s desire to re-engage in the relationship. I want to believe that it is possible ”, declared the French president, defending himself of any“ animosity towards Turkey ”. Not sure that this is enough to re-establish lasting damaged links. Especially since after the French presidential election, it will be Turkey’s turn, in 2023, to organize its general election. Erdogan, down in the polls, may count on his diaspora in France to garner votes.