What scenario for the transition between Donald Trump and Joe Biden? 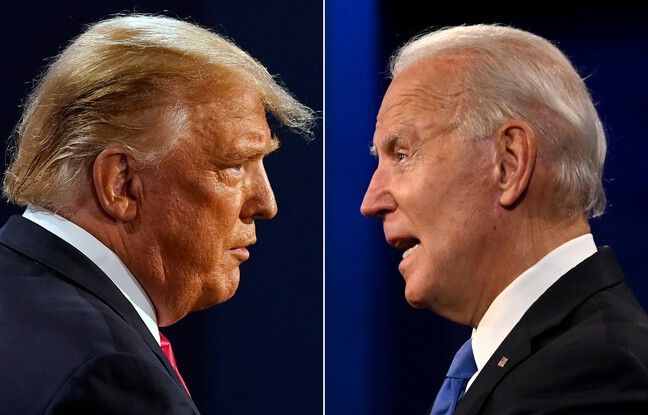 “We did it! After four days of suspense, Joe Biden was elected President of the United States. He will be sworn in on January 20 at theInauguration Day and will officially become the 46th US President. A victory, at present, that Donald Trump still does not recognize. After a tense campaign punctuated by personal attacks, the attitude and statements of the outgoing president suggest that the transition – which traditionally constitutes a period of cooperation between the two leaders – will be under tension.

Beyond the appeals to come, the transition period which opens promises to be very complicated. “In the American political system, this transition is a particularly sensitive moment, when the close collaboration between the outgoing and incoming teams must ensure continuity in the conduct of the country’s affairs. Donald Trump has hinted on several occasions that he would reserve the right to derogate from this democratic rule, ”explained to 20 Minutes
Jean-Eric Branaa, senior lecturer at Paris-II University, specialist in the United States and author of a biography on Joe Biden.

Could legal action “delay” the transition?

There are now 74 days of transition period before the inauguration of the new President of the United States. “US law sets a clear framework for the transfer of powers between an incumbent president and his successor in the White House. To have access to information from federal agencies, you need an administrative decision that starts the transition process, ”recalls Jean-Eric Branaa. But Donald Trump, who did not concede victory to his opponent, declaring on the contrary that the election was “far from over”, is not ready to initiate this procedure. Its teams have also launched several legal actions to obtain a new vote count in several decisive states.

“A long legal battle would delay the start of the transition, and that could be dangerous,” a Republican source told Congress. “Donald Trump does not have much leeway, he may try to delay things, prevent access to certain administrations or postpone the transmission of certain files,” adds Jean-Eric Branaa, author of Joe Biden. The man who must fix America (New World edition). In an article published on Friday, the New York Times stressed that Joe Biden’s team had prepared for several eventualities, in the event that Donald Trump did not admit defeat and his administration refused to cooperate.

How is Biden’s team preparing for the transition?

Behind the scenes, the handover is being prepared. Joe Biden’s team has already got to work. “The United States, to limit the risks of politicizing this potentially delicate transition, has adopted a law, the Presidential Transition Act, which gives career senior officials significant power over the transfer of data and data. expertise to the president-elect’s team, such as daily briefings from intelligence agencies, ”explains Jean-Eric Branaa. “It is today the task of Democrat Tef Kaufman – author of a law enacting the rules to be followed for the handover between two presidents – to coordinate this work of transition for Joe Biden”.

Under the address buildbackbetter.com [tiré de son slogan de campagne], Joe Biden and Kamala Harris’ transition team has already set up its website. Since June, she has formed a team of around 100 people, made up of former Obama administration officials, and Democratic Party officials of all stripes. “Joe Biden is already briefed, since this summer, by the intelligence services. It is now for him to form a government, to appoint some 4,000 people to key positions (of which 1,200 must be confirmed by Congress) and to prepare the first days of the newly elected President, ”adds the lecturer at the conference. Paris-II University. Some members of the future government could be announced as early as Thanksgiving, at the end of November, estimates some American journalists.

Will Donald Trump play the politics of chaos?

“The administrative transition could be greatly disrupted” insofar as Donald Trump “could privilege his personal interests and his defense”, believe today the experts of the Transition Integrity Project (a group made up of former bi-partisan government and political officials, academics and journalists), who have studied and published a series of scenarios questioning the risk of a transition made chaotic by a president who refuses his defeat. Donald Trump could first of all be tempted by “take the money and run”. For him, it would be a question of preserving his financial interests by injecting federal funds into his own affairs, “by negotiating agreements with foreign countries”, or by destroying “documents likely to implicate foreign governments and partners. financial ”, say the authors of the report.

“Massive amnesties” for Donald Trump and his relatives, would also be likely to be signed by his Vice President Mike Pence, or even by himself, in order to protect the current administration against further prosecution. Until the eve of the handover, “the tenant of the White House could even order the destruction of certain evidence likely to fuel prosecutions, or to classify many documents,” considers the report of the Transition Integrity Project. A scenario to which Jean Eric Branaa does not quite subscribe. “It is very unlikely – and above all impossible – that Donald Trump could ‘sabotage’ this transition in this way. Any document or post-it that leaves the American High Administration is automatically sent to the national archives. When a new team arrives, desks or drawers are not emptied, as may be the case in other countries. The United States is another way of working, another democracy, ”recalls the specialist in American politics.