When heads of state or government are attacked 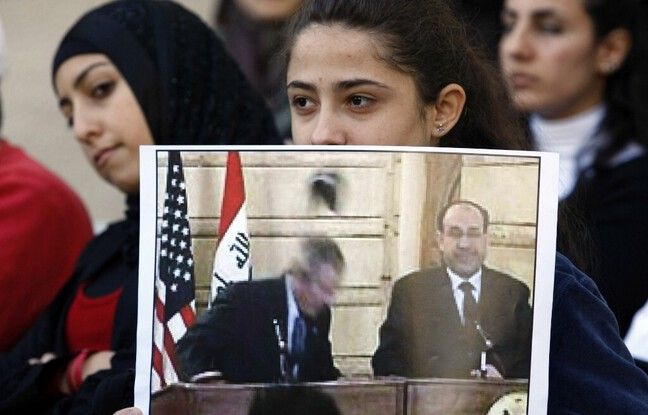 Before French President Emmanuel Macron, slapped on Tuesday during a trip, other international leaders were the target of attacks or incivility during public outings. One of the most striking precedents dates from December 2008: President George W. Bush narrowly dodged the shoe-throwing – the ultimate insult in the Arab world – by an Iraqi journalist angry at the American intervention in Iraq. Bush had commented with humor on the incident, which had put the security services in charge of the close protection of the leader on the teeth: “I do not know what the guy said, but I saw his sole. “

In Germany, Helmut Kohl even came to blows with demonstrators. The German Chancellor was bombarded with tomatoes, eggs and paint during a 1991 visit to Halle, a newly reunited city in eastern Germany. His bodyguards had been forced to belt him to protect him.

Jospin lectures teenagers in the countryside

When he was Minister of the Economy, Emmanuel Macron had already been targeted in June 2016 by hostile demonstrators, who had thrown eggs at him during a trip to the Paris region, shouting “get it!” “. In December 2014 in Namur, Belgian Prime Minister Charles Michel was bombarded with mayonnaise fries by former Femen activists who wanted to show their hostility to the austerity measures decreed by the government.

Campaigning for the presidential election in February 2012, François Hollande was covered in flour by a woman while he was making a speech in the gallery, during the gathering of an association to help the poorly housed. Ten years earlier, Prime Minister Lionel Jospin, also in the countryside, had been sprayed with ketchup by two teenagers, whom he had then lectured behind the scenes.

Many political figures have been the victims of attacks with pies. The Swedish king Carl XVI Gustaf was the victim in 2001 of a strawberry pie throw, thrown at close range by a young man of 16, immediately thrown to the ground by the sovereign’s bodyguards. A year earlier, Canadian Prime Minister Jean Chrétien had received a cream pie in the face. Found guilty of assault, the entarteur, a 24-year-old actor opposed to the government’s social policy, had been sentenced to thirty days in prison.