While Texas is paralyzed by the cold, its senator Ted Cruz goes to Cancun with family 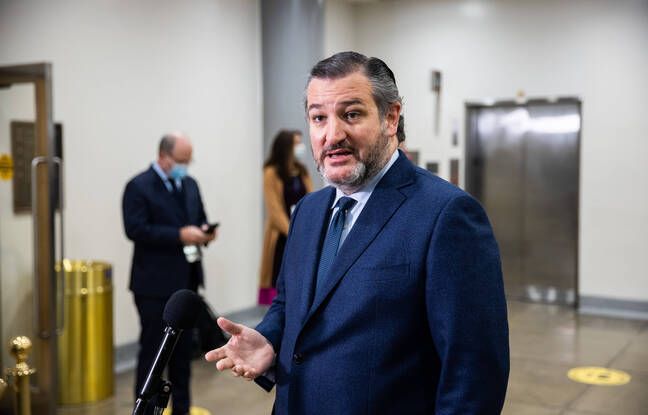 It is a rather incomprehensible political blunder. As Texas is paralyzed by a cold snap that has killed more than 20 in the United States, its Senator Ted Cruz flew with his family to sunny Cancun, Mexico on Wednesday. Faced with outrage, with 500,000 Texans still deprived of electricity on Thursday, the former presidential candidate, who has serious ambitions for 2024, assured that he had wanted to be “a good father” and that he was returning this Thursday afternoon. Without knowing if he was forced to shorten his stay or had planned from the start to simply accompany his daughters with an express return trip.

“Our daughters asked to go on vacation with friends”

Photos emerged on social media on Wednesday evening. It shows a person who looks like Ted Cruz, wearing a mask stamped with the star of the Lone Star State, boarding a flight to Cancun. Immediately, Twitter ignites, with the hashtag #CancunCruz and #FlyinTed (a pun on his nickname “Lyin ‘Ted”, “Ted the liar”, given to him by Donald Trump in 2016.). Is it really Cruz? Are the photos authentic? Radio silence in the Republican senator’s communications team.

Ok, at first I didn’t think this was ted cruz, but this person has the same mask as the senator.

Did Ted Cruz fly to Cancun today during his state’s emergency? https://t.co/dZe90haUzN pic.twitter.com/hMdOKdAuFM

At 11:30 p.m., a journalist claims to have verified the information, but without sourcing it. And then Thursday morning, it is Fox News which confirms it with a “republican source”: Ted Cruz took the plane with his family, it seems to go on vacation to Cancun. According to NBC, Cruz had even requested the assistance of the Houston police to escort him to the airport.

Ted Cruz’s team ended up issuing an official statement midday Thursday: “With school canceled this week, our daughters have asked to go on vacation with friends. I wanted to be a good father, I flew with them last night and I’m coming back this afternoon, ”explains the senator.

Senator Ted Cruz: “…With school cancelled for the week, our girls asked to take a trip with friends.  Wanting to be a good dad, I flew down with them last night and am flying back this afternoon…” pic.twitter.com/me53hmmZ4P

According to CNN, Ted Cruz is expected Thursday at the Houston airport, presumably on a flight announced at 4:05 pm. US journalist Jake Sherman posted a screenshot of a passenger identified as “CRU, R”, presumably for “Rafael Cruz” (“Ted” comes from his middle name “Edward”), on the list of waiting for a United flight to be upgraded. At this point, it is not known whether his return ticket had been booked in advance or at the last minute. According to the rules in force, he should be forced to show proof of a negative Covid-19 test to be accepted in the United States.

When Ted Cruz left on Wednesday, more than 2 million people were still without power in Texas, a figure that fell to 500,000 on Thursday, according to the Poweroutage site. As Texans share photos of their frozen toilets on Twitter, this getaway could cost the Republican senator dear politically, with calls for resignation which multiply. Whoever dreams of getting into the next primary after failing against Donald Trump in 2016 has, it seems, forgotten the basis of politics, as CNN reminds: when your voters face a crisis, do not leave on holiday. Especially not in the sun when people are freezing to death.