Why did Joe Biden come to call Vladimir Putin a “killer”? 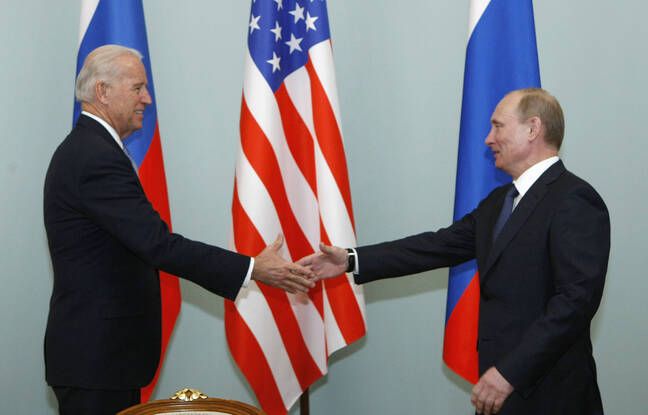 A president of the United States who says that the Russian president is a “killer”; a Russian president who replies “it is he who says it who is”… We are not in a vague schoolboy comedy of the time of the Cold War but in March 2021, and the protagonists are Joe Biden and Vladimir Poutine. In the same television interview, broadcast Wednesday, the US president added that we will see “soon the price he [Vladimir Poutine] will pay ”for his actions. Not very diplomatic remarks which, one suspects it, were moderately appreciated in Moscow, even if Russia wields irony in order to avoid escalation. The Russian president said he wished Joe Biden “good health, without any irony.”

In order to try to understand how the American president came to treat one of his counterparts as a “killer” – whatever one thinks of the said counterpart – we cannot totally exclude the simple blunder. And Joe Biden is, in common knowledge, a serial blunderer. Also, the new president has had very little contact with the press since the start of his presidency: “He is the first president not to have given a press conference in the first fifty days of his mandate and this interview was the one of the first ”, reminds 20 Minutes Marie-Christine Bonzom, political scientist specializing in the United States.

Goof or not, Joe Biden’s statement appears to be at least a serious turn of the United States on Russia from the Trump years. The previous president was considered rather conciliatory vis-à-vis Vladimir Putin. An impression more than anything else, for the director of research at Iris, Jean de Gliniasty: “Donald Trump has taken a lot of measures against Russia and has strengthened the sanctions, contrary to what the Democrats have been able to suggest during its mandate. Washington nevertheless keeps in mind the press conference between Trump and Putin during a meeting in 2018, where the American president had an almost deferential attitude towards the master of the Kremlin. “Many Republicans disapproved of this attitude,” recalls Marie-Christine Bonzom.

For her, Joe Biden acts against Russia under triple pressure. First, that of the intelligence agencies and that of a part of the Republicans, including the Texan senator Ted Cruz, supporters of the strong way against Moscow. “Intelligence agencies just released a report showing possible Russian involvement in the 2020 presidential campaign and some Republicans want to push to avoid the completion of the NordStream 2 pipeline [entre la Russie et l’Allemagne] », Details the political scientist.

The champion of human rights and democracy

The third push comes from Democrats, more Clintonians, supporters of a harsher discourse with Russia. President Joe Biden actually seems to reconnect with what he had known as vice president, over the late Obama years. After attempting a rapprochement at the start of his mandate, the former administration ended up considering “Russia as a lost cause.” They think it has definitely gone to the Chinese side, ”believes Jean de Gliniasty, author of A brief history of Franco-Russian relations (Ed. The Inventory).

“But that can only be explained by the fact that Biden wants to make the United States the standard bearer of human rights and democracy, which is the traditional position of the Democratic Party,” he said. And it is true that since the start of his mandate, on the international scene, the new president has rather distinguished himself by taking a clear stance on these subjects, including with allies. This was the case with Saudi Arabia over the assassination of Jamal Khashoggi, about which Crown Prince Mohammed Ben Salman has been mentioned by name.

Joe Biden has also been, this time in line with the Trump administration, firm against China, on Hong Kong and the situation of the Uyghurs. But with another level of language. “He will have to be careful not to be accused of carrying double standards between China and Russia,” warns Marie-Christine Bonzom. Except that since the Obama era, it seems obvious that for the United States there is no equal sign between Moscow and Beijing: the competitor – if not the enemy – main, is Chinese. “This is why Joe Biden could not afford such a statement on Xi Jinping. If he allows himself with Vladimir Putin, it is because he considers that Russia is only a regional power. Which I think he’s wrong, ”explains Jean de Gliniasty.

And after ? The escalation seems improbable: at most, there is a risk of Russian responses on the ground in Ukraine, “in which case Washington would be there in support of Kiev”, thinks the director of research at Iris. But hardly more. It is about protecting the well-understood interests of each side, which could be undermined in this sequence. “The two capitals are used to these moments when they blow hot and cold”, tempers Marie-Christine Bonzom.

If the cold was for Wednesday, the hot is already for this Thursday: Joe Biden has not canceled the meeting between his special envoy for Afghanistan, Zalmay Khalilzad, the Taliban and… the Russians, organized in… Moscow. The most likely is in fact that the various cooperation between the two states could seize up a bit, but that they will continue. The handshake of reconciliation at the end of the film between the two heads of state, however, may not be for now.