Why has the epidemic gone out of control in India? 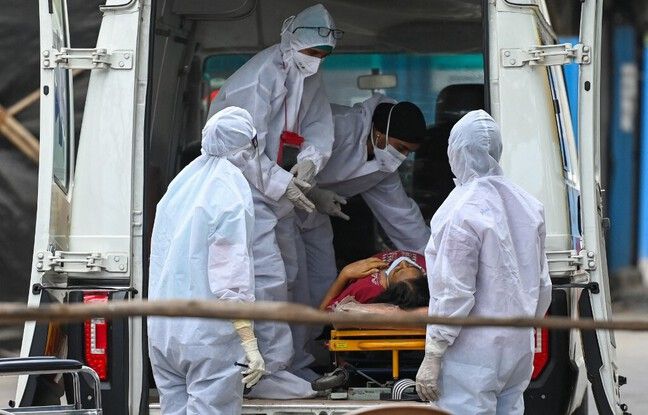 A sad record. On Sunday, India crossed the mark of 350,000 cases of contamination in just 24 hours, a figure never reached in the world since the start of the coronavirus epidemic.

Contamination, death, lack of material, Indian variant … 20 Minutes takes stock of the epidemic situation in India, which has grown out of control.

What are the numbers for the epidemic in India?

The giant of 1.3 billion inhabitants fails to contain the epidemic outbreak. In 24 hours, India recorded 350,000 new cases of contamination, unprecedented globally, and 2,767 deaths, a national record. Since the start of the epidemic, 17.3 million people have been infected in India and more than 195,000 have died from it, placing the country fourth in the world for the number of deaths, according to figures from Johns Hopkins University , arrested this Monday. Figures very probably underestimated, according to several specialists.

“Finally, India did not have a second wave this fall. In December-January, people paid less attention, life had almost returned to normal. India has paid a heavy price, either because of irresponsible practices, such as gatherings, the non-respect of barrier gestures, or because of practices impossible to maintain, due to the density of the population in the big cities. or overloaded transport. We are now in the catastrophic situation that everyone initially predicted in 2020 and which finally arrives in 2021 ”, explains Frédéric Landy, specialist in India, professor at Paris-Nanterre University and associate researcher at the French Institute of Pondicherry (India), in 20 Minutes.

What are the reasons for this epidemic outbreak?

According to experts, in recent weeks, thousands of people have participated in political rallies in states where regional elections are held or in religious festivals, most of the time without masks, promoting the resurgence of contaminations. “The whole country has been complacent. We allowed social, religious and political gatherings, ”Rajib Dasgupta, professor of health at Jawaharlal Nehru University told AFP,“ no one was standing in line (to respect physical distancing) ”.

The Hindu religious festival Kumbh Mela alone, which has been taking place in northern India since January, has attracted 25 million people, including 4.6 million in the space of two days in mid-April, the officials said. local authorities. “Pilgrimages, political meetings … All these points have been added to an already degraded health situation to give the current catastrophic situation”, estimates Frédéric Landy.

L’#Inde fears that the religious festival #KumbhMela in Haridwar, one of the largest in the world which attracts millions of Hindu pilgrims, does not revive the coronavirus epidemic in the country 🎥 @atishpatel #AFPTV #AFP pic.twitter.com/8CeFTeORrv

If the gatherings worry, the “Indian” variant could also be responsible for the epidemic outbreak. According to the Institute of Virology in Pune, India, cited by The Indian Express, this “Indian” variant, also called B.1.617, was identified in 61% of samples taken in the state of Maharashtra, between January and March. This variant is qualified as a “double mutant” because it carries in particular two disturbing mutations at the level of the peak protein (“spike”) of the Sars-CoV-2 virus. The first, E484Q, is close to that already observed on the South African and Brazilian variants (E484K), suspected of causing a lower effectiveness of the vaccination and an increased risk of reinfection. The second, L452R, is also present in a variant spotted in California, and may be able to cause increased transmission.

Why are hospitals unable to control the epidemic?

India’s health care system is on the verge of explosion. In hospitals, witnesses describe corridors cluttered with beds and stretchers and families begging in vain for oxygen or a place for their dying loved ones. “I saw three corpses in six minutes,” Ravi Kumar told AFP, who managed to get his octogenarian grandfather admitted to a Delhi hospital. Some accounts describe corridors cluttered with beds and stretchers occupied by two or three people. “Inside, there are no beds, just stretchers side by side with two patients on each,” adds Ravi Kumar.

“It is not the dangerousness of the virus which is highlighted with this epidemic outbreak, it is the dilapidated state of the Indian health system, the structures are catastrophic, there is a lack of places, oxygen, beds, drugs. . Normally, if you are rich, you have access to clinics, if you are poor, you have very little access to an equitable health care system. But currently, even the richest are struggling to find a bed. Until now, we were in a two-speed India, but now the situation is catastrophic for everyone, ”worries Frédéric Landy.

On the vaccination side, India’s efforts to vaccinate 300 million people by July have come up against obstacles. Only 114 million injections have been administered so far, according to local authorities and vaccine stocks are dwindling. “Vaccination has been delayed for a number of reasons. You had to register on the Internet to have access to it, but access is very limited in India, health services have not reached enough people, in any case, not in the distant countryside, add to that the difficulties supply of vaccines and fear of the vaccine in part of the population, ”analyzes Frédéric Landy.

What does the government do ?

Faced with this “storm”, according to Indian Prime Minister Narendra Modi, local authorities have extended the confinement in force in the capital New Delhi by one week. “The ravages of the coronavirus continue and there is no respite,” Delhi Chief Minister Arvind Kejriwal said. In Maharashtra, all non-essential stores have been closed, while in the state of Uttar Pradesh, which has 200 million people, a lockdown was put in place over the weekend.

Under fire from critics for its lack of preparation before this new wave of contamination, the central government has set up special trains to transport oxygen reserves to the cities most affected, escorted by the army. He also urged manufacturers to speed up the production of oxygen and drugs that are lacking.

Has India received support from other countries?

Several countries have mobilized to provide assistance to India. On Sunday, the United States announced that it would “immediately” send components for the production of vaccines as well as medical equipment to India. “Vital medical equipment, including hundreds of oxygen concentrators and respirators, are now on their way from the UK to India,” British Prime Minister Boris Johnson said. The European Union, for its part, promised “assistance”, while Germany was preparing to send emergency aid and France was preparing to “provide significant support in the coming days in terms of military capabilities. oxygen ”.