Why is this case a test for Europe? 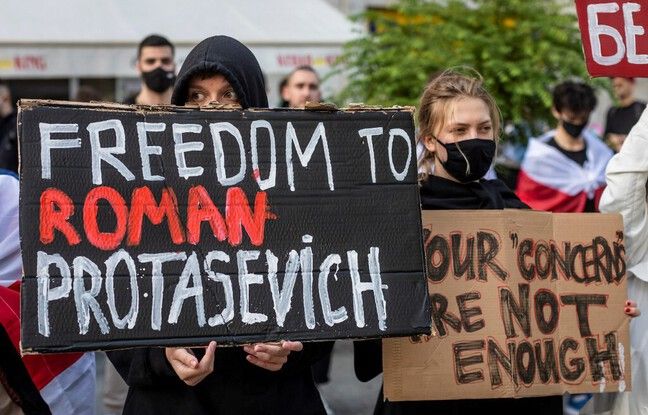 It is a matter which has not finished embarrassing the European Union. A civilian flight from Athens to Vilnius was rerouted by Belarus and forced to land near Minsk, over a false bomb threat. The real reason for this diversion was the presence on board the Boeing of Roman Protassevich, a journalist opposing the country’s president Alexander Lukashenko, arrested during the plane’s transit in Belarus.

Difficult for the 27 not to react: it is about a European flight, between two of their countries moreover. On Monday, European leaders “strongly condemned the forced landing of a Ryanair plane in Minsk (…) which undermined air safety”. An act qualified as “state terrorism” by several capitals, while the European Union has decided to close its airspace to Belarus, in addition to other economic and symbolic sanctions.

In search of the right answer

“This is clearly a test for the European Union, especially since Belarus hides the influence of Russia”, an ally of the Lukashenko regime, notes Lukas Aubin, doctor in geopolitics in post-Soviet areas . The European Union has often failed in previous “tests” against Russia, in particular with the episode of the annexation of Crimea. Since this original failure, “Russia has not stopped testing the limits and the shortcomings of the 27”, supports the researcher. Same observation on the side of Anne de Tinguy, specialist in Russia: “Belarus has behaved unacceptable which is directly aimed at the European Union. The latter is forced to react ”.

Yes but how ? This is perhaps the real test for Europe, to find an appropriate, fair and firm response. And that is not easy, especially since military intervention can be automatically excluded. Lukas Aubin: “From then on, we find the limit of democratic regimes in the face of authoritarian regimes. The use of force is the prerogative of Russia and Belarus, even against their own populations. Faced with this, the 27 find themselves limited ”.

Are they even capable of it? Admittedly, the first sanctions were taken, some of which were rather strong, such as the closure of airspace – 2,000 planes flew over Belarus every day. But they clearly seem insufficient to bend the authoritarian Belarusian regime. Can Brussels really go further? “The European Union is made up of 27 states against one, which greatly slows down its decisions and potential actions. It is difficult to find a consensus or to strike really hard, ”points out Lukas Aubin. A problem that Belarus does not have. For the doctor in geopolitics, “We can still see one of the limits of non-military alliances: they have little impact. “

Is airspace closure the strongest measure that will be taken? Not so sure, says Anne de Tinguy. If the 27 are sometimes a source of division and slowdown in decision-making, by their number and their importance they have a very important weight to weigh: “The 27 can still severely sanction Belarus economically. Europe is an essential partner for the country with which there are many trade alliances, and to be excluded from it would have serious impacts. While this diplomatic crisis is a test for Brussels, it can perhaps finally demonstrate that its arsenal of sanctions is vast and threatening.

A new difficulty then arises. “The whole issue is not to impact civil society too much with these sanctions”, underlines Anne de Tinguy. Let us take the closure of Belarusian airspace for example: “Therefore, are we not also complicating the extradition of political opponents of the regime? “Asks Lukas Aubin, who recalls that Belarus still applies the death penalty.

In punishing the country too hard, there is a significant risk: “If we isolate it too much, we push it even more into the arms of Russia, which is just waiting for that”, raises Anne de Tinguy. A Russia already necessary for the political survival of Alexander Lukashenko, and which could well become even more essential. Enough to do Vladimir Putin’s business. Lukas Aubin supports: “Russia has always sought to have a buffer zone between the European Union and itself and not be surrounded by countries of the 27. Belarus can offer it that”. For the European Union, the test is therefore multiple: knowing how to answer, but also finding the appropriate answer.