With broad support, Mario Draghi on his way to the post of Prime Minister 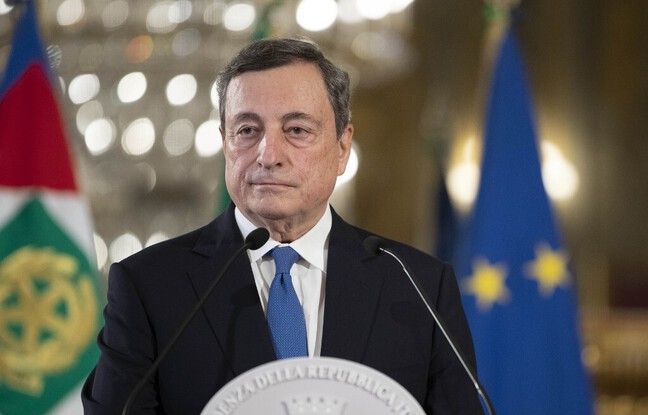 Asked to get Italy out of its political paralysis in the midst of a pandemic, Mario Draghi, now assured of a large majority in parliament, could accept the post of Prime Minister on Friday, succeeding Giuseppe Conte who resigned after the outbreak of his coalition.

The former president of the European Central Bank (ECB) must go to the Quirinal Palace to formally communicate his agreement to the President of the Republic Sergio Mattarella.

“Home straight for Draghi”, headlined Friday The Corriere della Sera, the main Italian daily, while the The messenger headlined the “Birth of the Draghi Government”. Mario Draghi, nicknamed “Super Mario” for his role in the 2012 eurozone debt crisis, could unveil his government and be sworn in by the end of the weekend, then seek confidence in parliament at the start of this month. week, while the peninsula, hard hit by the Covid-19, is in full recession.

Since Sergio Mattarella called on him on February 3, Mario Draghi has conducted all-out talks with the political parties represented in parliament, which have enabled him to form a motley team ranging from the Democratic Party (PD, center-left) to Matteo Salvini’s far-right League and Silvio Berlusconi’s right-wing Forza Italia party. Thursday, in extremis, the unclassifiable 5 Star Movement (M5S), anti-system until it came to power, also gave the green light during an online vote of its activists, thus bringing down the last obstacle to a government of national unity. The difficulties have only just begun, however, for this affable 73-year-old Italian renowned for his discretion, his seriousness and his determination.

One of the worst GDP drops in the euro area

Italy, which is approaching the threshold of 100,000 deaths from Covid, recorded one of the worst drops in GDP in the euro zone in 2020, with a plunge of 8.9%. The third largest economy in the area relies heavily on the windfall of more than 200 billion European funds, conditioned on the presentation in Brussels by the end of April of a detailed expenditure plan. “The Covid-19 has worsened the crisis and Italy continues to be the sick man of Europe”, summarizes Fabio Pammolli, professor of economics at the Polytechnic business school in Milan.

Over the years, Italy has accumulated a colossal debt of nearly 2.6 trillion euros, or 158% of GDP at the end of 2020, the highest ratio in the euro area behind Greece. At the top of the priorities is also the acceleration of the vaccination campaign, affected as in other European countries by delays in supply. Only 1.2 million Italians out of 60 million have been vaccinated.

Other projects that have remained in the pipeline for decades await him on his desk in Palazzo Chigi, seat of government in the heart of Rome: remedy the slowness of justice, attack the bureaucracy by making the administration more efficient , and launch the ecological transition, which will be coordinated by a full-fledged ministry, the first of its kind in Italy.

Even if he benefits for the moment from his aura of “savior of the nation”, this man with pepper and salt hair trained in the Jesuits will have to show a lot of skill to stay in the saddle over the long term in the face of challenges. political parties which are expected to become more and more agitated as the next elections approach, scheduled for 2023. “In politics, as in nature, there are cycles: honeymoon, peak, decline. Even Draghi cannot defy this law, ”warns the political analysis site Policy Sonar. “Now he is in the ‘honeymoon’ phase and no one will dare challenge him in the coming months,” he reassures, however.

Does vaccination lead to the emergence of new variants?