With the drop in trips, coach operators are at a standstill 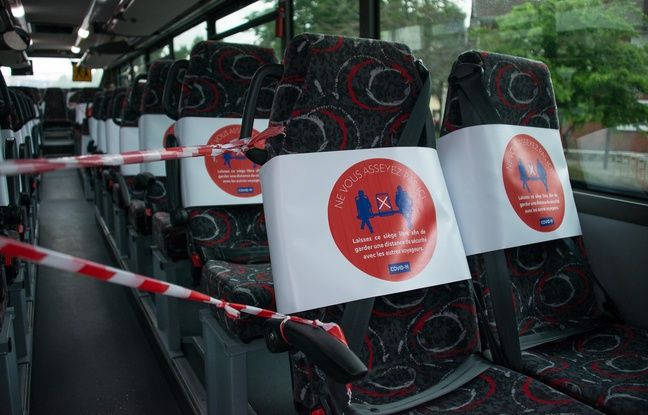 With the sudden cessation of travel, the vehicles remained in the garage. “We had no departure from March to September, explains Thierry Selleret, manager of the company. Then we made a few trips before the reconfinement, but it is nowhere near enough. Our turnover has fallen by more than 90%. For the moment, we have no perspective and we cannot project ourselves into the future ”.

“In 2020, the turnover fell on average by 80% in the sector, confirms to 20 Minutes Jean-Sébastien Barrault, President of the National Federation of Passenger Transport (FNTV). For 2021, the order books are empty, and we do not see any improvement in the situation within several months ”. The FNTV believes that activity will not really resume until 2022, at best. “We are completely devastated,” adds Pierrick Burban, president of the Group of French tourist coach operators (GATF), created following the pandemic.

“Without partial unemployment, we would no longer be there”

It must be said that the main sources of activity have dried up one by one, even before the re-containment. The tourists ? Foreigners did not come, and the clubs of the third age, as well as the works councils, no longer organize stays. Language trips for schoolchildren? Too complicated to organize with health restrictions. The famous “Macron cars”, many of which are operated by SMEs? One of the leaders in the sector, Blablacar (and its brand Blablabus) announced on Wednesday that it did not plan to run its buses before spring 2021. “It also allows our partners not to operate, with some of the drivers covered by partial unemployment ”explained to AFP the director general, Nicolas Brusson.

The only ones who manage to get their head out of the water (a little) are the companies that operate on “contracted” transport: school bus service or departmental and regional lines, for example, which provide a form of minimum income. This is the case with Schidler coaches, located in Lorraine. The boss, Thierry Schidler, takes stock: “Our activity normally relies 50% on tourism and 50% on education. This diversification has enabled us to switch our “tourism” drivers to school lines ”. However, he does not cry victory: “We still lost 3 million euros in turnover, which represents about 40% of the total. State aid is welcome: without partial unemployment, we would no longer be here today. “.

The fact remains that these aids are today considered insufficient by the representatives of the sector. “Unlike other coach companies, we are totally dependent on tourism, argues Pierrick Burban, of GATF. We should be treated in the same way as hotels or restaurants ”. “The state must extend the coverage of partial unemployment to 100% beyond December 31, 2020, asks for his part Jean-Sébastien Barrault. We are also very worried, because we had obtained the postponement of loan deadlines for companies in the sector until March 2021. And since activity will not resume for a long time, companies will not be able to pay at that time. . It is a real wall which presents itself in front of us ”.

A reality confirmed by Thierry Selleret, the manager of Loiret Tourisme. “A new coach costs on average between 270,000 and 450,000 euros, depending on the services,” he explains. For a single vehicle, the monthly credit can represent between 3,000 and 5,000 euros. We have managed to postpone these credits for several months, but they will have to be paid one day, just like the government guaranteed loan (PGE). And if we do not make a turnover, we will not be able to reimburse ”.

Coach operators therefore hope that the 2021 season will allow a recovery to begin, particularly for the months of March to June. “Customers will not come back until there is a vaccine” prophesies Thierry Schidler. In the meantime, representatives of the sector continue to plead their case at Bercy in order to obtain guarantees for next year. A meeting is normally scheduled for the beginning of next week to take stock.