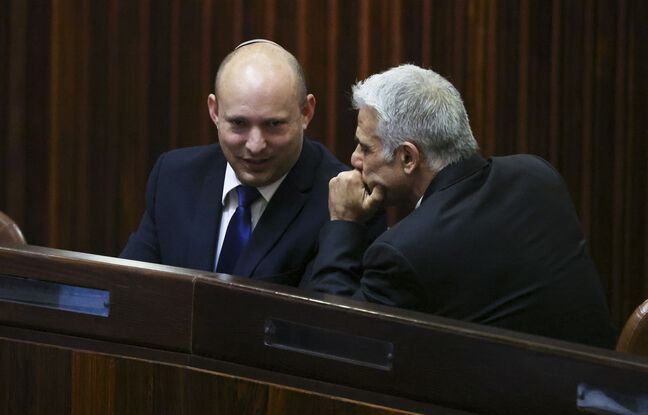 A page is perhaps turning in Israel: after more than twelve years as Prime Minister – a record – Benyamin Netanyahu is threatened with losing power. An “anti-Netanyahu” front would, on paper, have the majority needed to form a new government. This is in any case what Yaïr Lapid said Wednesday evening, the leader of the centrist party who came in second in the fourth legislative elections in two years, last March. He has a few days to form a government and have it invested by the Knesset. It is not won: the outgoing Prime Minister still has a few cards in his pocket and defections cannot be ruled out.

Seen from France, the team assembled by Yaïr Lapid has everything baroque: we find the centrists, the left, but also the secular far-right and an Islamist Arab party. Asked by 20 Minutes, Frédéric Encel, lecturer at Science po and author of Israel’s Geopolitical Atlas (Otherwise) reminds us that this is not necessarily very new: “Since the end of the 1990s, all the coalitions have been very heterogeneous. “

This one can be more than the others “and even from an Israeli point of view”, thinks the doctor in geopolitics Anne-Sophie Sebban-Bécache, director of AJC Paris questioned by 20 Minutes. This meeting is due to the great weariness of Israelis, who want to avoid a fifth legislative election in two and a half years. And the small common denominator of all these parties: their opposition to Benyamin Netanyahu. This is new: “For the first time, there is undoubtedly such a strong repulsion towards a particular personality that political forces manage to agree on his ouster. “

The current Prime Minister polarizes Israeli political life. The legislative elections that have followed since 2019 have all been referendums for or against “Bibi”, which he never really won or really lost. By the way, Netanyahu is still there and “the political agenda is dictated by its judicial agenda,” notes Anne-Sophie Sebban-Bécache. The outgoing Prime Minister – but not quite out yet – is indeed indicted in several major corruption cases. So much so that if the coalition succeeds in investing a government, “we could even consider that it is a very civic, very democratic government”, thinks Frédéric Encel.

The Palestinian question put under wraps

To get there, everyone had to make concessions. This possible alternation should be done at the cost of the state on the Palestinian file. “Lapid and Bennet agreed to ensure that the priority subjects of the next government would be economic questions,” explains Anne-Sophie Sebban-Bécache. It must be said that there is not much in common between the positions of the left-wing Meretz party, in favor of a two-state solution, and those of Yamina, led by Naftali Bennett, former right-hand man and minister of Defense of Netanyahu, supporter of a hard line.

This putting under wraps of the Palestinian question is not the least surprising fact. Barely a month ago, the new clash with Hamas in Gaza and, above all, the Israeli Arab riots brought the subject back to the forefront. A subject which has become, it is true, secondary in the political life of the Hebrew state in recent years. Frédéric Encel is not very surprised: “Many observers only work in emotion. In reality, the last conflict does not change any of the fundamentals of the situation, and the international community has already moved on. “

The Biden administration and the American Democrats, whose relations with Benjamin Netanyahu are notoriously bitter, must watch the formation of this new government carefully. Anne-Sophie Sebban-Bécache, director of one of the main organizations of American Jews, does not however think that this changes “dramatically” the situation of American-Israeli relations.

Especially since Naftali Bennett, who is expected to take the post of Prime Minister for the first two years of the legislature, has positions quite similar to those of a Netanyahu on international issues. Everything changes so that nothing visibly changes in Israel. If a page does end up turning, it will be more of a glossy page, centered on “Bibi”, than a page from a political science book.

Share
Facebook
Twitter
Pinterest
WhatsApp
Previous articleA few weeks before the election, the privatization of TERs is the subject of debate
Next articleEU could earn 170 billion euros by raising its global corporate tax by 25%