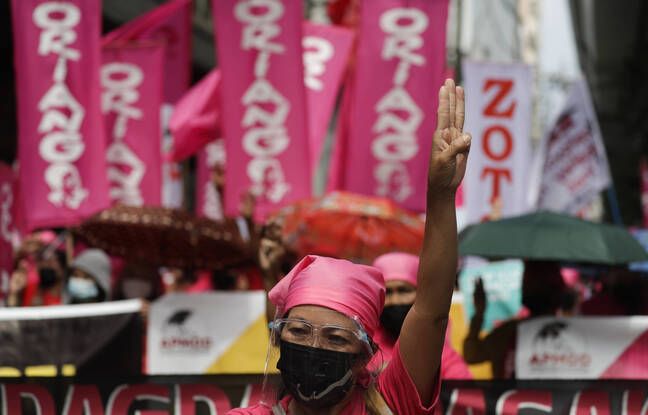 They transform their traditional skirt into a banner of resistance to the junta and are at the forefront of the demonstrations: women have paid a heavy price since the start of pro-democracy mobilization in Burma, with at least six “heroines” fallen under. The balls. This Monday, activists, teachers, farmers, workers, intellectuals and students marched in numbers in the streets of the country to mark International Women’s Day and demand “the return of Aung San Suu Kyi”, overthrown by the army on February 1st.

In Yangon, the demonstrators held up signs: “Together we can change the world” and multicolored flags made from their longyi, the traditional Burmese skirt. “The longyis protect us physically. (The security forces) who point their weapons at us are afraid of it, ”said a protester. Since the start of the peaceful uprising, Burmese women have started hanging these skirts high up in the streets along the route of the demonstrations.

Under the cobblestones, the skirt

The objective is to slow down the advance of the police and the army because a belief forbids men to go under women’s clothes, on pain of losing their manly power. Much less discreet than during the last popular uprisings of 1988 and 2007, already bloodily suppressed by the military, women now represent around 60% of demonstrators, according to Debbie Stothard of the International Federation for Human Rights ( FIDH). Many are often at the head of the processions.

In the first hours following the coup, 26-year-old Khine Mar Nwe left the textile factory where she makes clothes for Western consumers to engage in “a bitter struggle” against the putschist generals. . “We are here to demonstrate shoulder to shoulder with the men, we are not afraid,” said the young woman.

At least 50 protesters have been killed since the coup, including six women. Mya Thwate Thwate Khaing, 20, was the first victim of the coup. Hit by a shot in the head on February 9, she did not survive her injuries and became “a heroine” in the country. Tin Nwet Yee, a 59-year-old schoolteacher, was shot dead a few days later when she had joined the civil disobedience movement, refusing to return to work as a sign of resistance to the junta.

At the beginning of March, 19-year-old Kyal Sin, a follower of dance and martial arts, became another symbol of deadly violence. She was wearing a simple black t-shirt with the inscription “Everything will be fine” when she was hit by a bullet in the head. “I am very proud of our martyr women (…) I promise to fight relentlessly as long as I am alive for them”, assures Khine Mar Nwe.

Despite the leading figure of Ang San Suu Kyi, arrested by the army on February 1 and still held in secrecy, Burmese society remains deeply patriarchal. Some Burmese see in the pro-democracy mobilization the opportunity to also campaign for a more egalitarian society. “When clashes occur in rallies, some protesters ask us to back down. Even in this situation, we are fighting as women ”and we have to prove ourselves, says Cora, 33 years old.

Progress has been made under the governance of Aung San Suu Kyi. Women held 11% of seats in parliament in 2019, up from 3.5% nine years earlier. Many fear a huge step backwards with the military. 518 Burmese women have been arrested or charged since the putsch, according to the Association for Assistance to Political Prisoners, including six journalists.

The NGO urged the army on Monday to put an end to “brutal repression, sexual assault and physical violence that specifically targets women”.