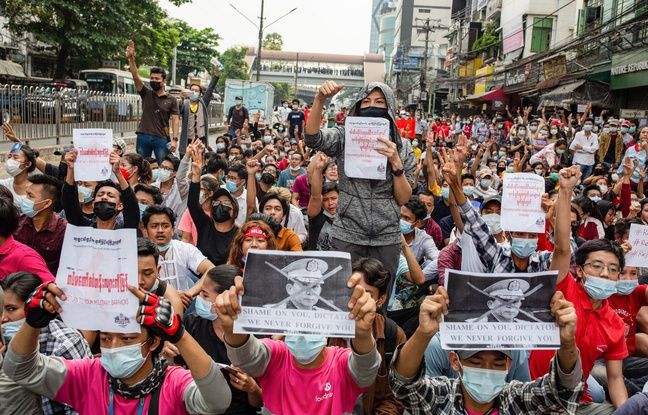 The situation is tense in Burma. State television raised the threat of “action” against protesters on Monday for the first time as massive crowds protested for the third consecutive day in Burma against the coup that toppled Aung San Suu Kyi. “Actions must be taken in accordance with the law (…) against offenses that disturb, prevent and destroy the stability of the state, public security and the rule of law,” said the channel MRTV, controlled by the state.

This is the first warning issued by the authorities since the protests began on Saturday. The sling is growing in the country. On Monday, several hundred thousand people, according to various estimates, were gathered in Rangoon, the economic capital. “We are not going to work even if our salary will drop,” Hnin Thazin, an employee in a clothing factory, told AFP, responding to the call for a general strike launched by the protesters. “I don’t want a dictatorship”.

Other workers joined the movement as well as saffron robed monks, lawyers, students, and nurses waving red flags in the colors of the National League for Democracy (LND), Aung San Suu Kyi’s party. , held incommunicado since Monday. “Free our leaders”, “respect our votes”, “reject the coup”, we could read on the banners.

“We used to live in fear, but we had a democratic government for five years. We are no longer afraid. We will not let this happen, ”said Kyaw Zin Tun, 29-year-old engineer. Demonstrations were also held in many other cities of the country, many residents parading on their two-wheelers in a concert of horns, as in Tangû, 300 kilometers north of Yangon.

In NayPyidaw, the capital, the police used water cannons against demonstrators, according to AFP journalists. Two people were injured, the source said, while images posted on social media showed two protesters on the ground after being targeted by the guns. On Sunday, the demonstrations took place without major incident. “Revolution Monday across the country against the dictatorship”, had launched the protesters, calling for “the general strike”.

Dozens of civil servants had already stopped work last week in protest. This wind of protest is unprecedented in Burma since the popular uprising of 2007, violently suppressed by the army. What is the exact goal of the demonstrators ?, asks Soe Myint Aung, analyst at the independent research center in Yangon. “Return to the fragile balance between civilian government and the military before the legislative elections of November 2020 or this time completely oust the army from power?”

The putschist generals put an end to a fragile democratic transition on February 1, establishing a state of emergency for one year and arresting Aung San Suu Kyi and other leaders of the NLD. Since then, more than 150 people – deputies, local officials, activists – have been arrested and are still in detention, according to the AAPP. Internet connections were partially restored on Sunday after being severely disrupted for 24 hours. Mobile data has also been restored, said Norwegian Telnor, one of the country’s main service providers.

Access to Facebook, a communication tool for millions of Burmese, however, remained restricted on Monday. Many hijacked censorship by using VPNs, tools that circumvent geographic restrictions. Events remained at the heart of the international agenda. Pope Francis on Sunday expressed his “solidarity with the Burmese people” and urged the military to work for “democratic coexistence”.

A few days earlier, the UN had called for the release of the detainees but had not formally condemned the coup d’état in its joint declaration, Beijing and Moscow, traditional supporters of the Burmese army at the United Nations, opposing each other. to this formulation. The United States and the European Union are on their side hovering the threat of sanctions. Burma has lived under the yoke of the military for almost 50 years since its independence in 1948.

Gradual liberalization began in 2010, then a civilian government, led de facto by Aung San Suu Kyi, came to power after the LND’s victory in the 2015 elections. The party again won overwhelmingly the legislative elections of November, a poll whose regularity the military contest, even if international observers have not noted any major problems. In reality, the generals feared to see their influence diminish after the victory of the NLD, which could have wanted to modify the Constitution very favorable to the military.

Very recently criticized by the international community for her passivity in the Rohingya Muslim crisis, Aung San Suu Kyi, under house arrest for 15 years for her opposition to the junta, remains adored in her country. The former leader would be “in good health”, placed under house arrest in Naypyidaw, the capital, according to her party. The army has promised free elections at the end of the state of emergency.

Former president buried with fewer honors than his predecessors