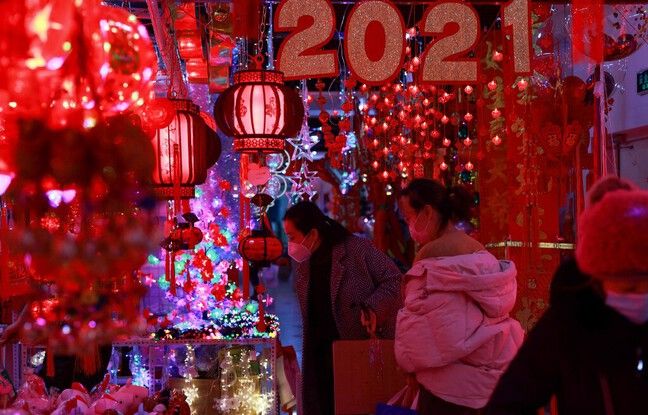 China is preparing to celebrate the transition to a new year, that of the Metal Ox, on February 12. In the country, this period is a time of celebration when families reunite, where expatriates return to the country, where hundreds of millions of people storm transport. But this year, the Covid-19 epidemic is still spoiling the party. For the second year in a row, restrictive measures against the pandemic are preventing the Chinese from celebrating the New Year. With what consequences?

“This year, we expect 80% fewer trips, it’s a little better than last year,” says Antoine Bondaz, researcher at the Foundation for Strategic Research (FRS) and specialist in China. In 2020, “people were much more worried. We were at the peak of the epidemic in Wuhan, there was considerable concern, strong measures in the provinces of the country, ”he says. The Wuhan area had been confined two days before the New Year.

This year, those who hoped to finally be able to celebrate this transition to the New Year were disappointed. The regime called on the population to stay at home, for fear of the resumption of the epidemic when a few hundred new cases have been diagnosed in recent weeks. This is why the National Commission for Health requires travelers from cities returning to the countryside to provide a negative Covid-19 test of less than seven days, and an obligation to remain under observation with their families. “At New Year’s, city dwellers go to the countryside. Like last year, there is a fear that the virus will spread to the countryside because the hospital system is not the same there, ”explains Antoine Bondaz.

But some regions have imposed tougher rules, such as mandatory – and paid – 14-day quarantine at a government-selected hotel. Measures that have triggered the anger of Internet users on the social network Weibo, reports CNN. “The state only gives us seven days off, and now you are asking returnees to be isolated for 14 days. What are your brains made of? “

A traditional and family celebration

The cancellation of this holiday is heartbreaking for many Chinese, for whom it is sometimes the only occasion of the year to return to their families. This holiday gives rise to a week of vacation for all from February 11 to 17 this year. “It’s a traditional family celebration, which lasts several days. We see the family of his father, his mother. It is a moment of sharing and exchange, one of the rare times when people have holidays, ”says Antoine Bondaz.

It is also a time when factories stop working. But if the productive system is at a standstill, consumption does not weaken. “This festival has a very strong economic weight,” says Mary-Françoise Renard, an economist specializing in China. “It is also on this occasion that people exchange red envelopes which, most of the time, contain money. »Important money transfers which will not take place this year.

Vouchers and a daycare

“This year, the Chinese are more optimistic with the vaccination campaign, for example. They realize that the economy is picking up again even if consumption is not completely restarted compared to 2019 “, adds Antoine Bondaz, which could have a” small impact “on growth. “Obviously, there are expenses that will not be made, in terms of gifts or transport for example, but households can use this money otherwise, make an arbitration”, points out Mary-Françoise Renard.

To convince the Chinese not to move, incentive trade operations have been set up in some provinces. The city of Hangzhou, seat of several tech giants, offers its inhabitants 1,000 yuan (128 euros) if they give up all travel. Yiwu, known for its gigantic export merchandise market, rewards its citizens with vouchers and offers free activities to occupy the children.

Online video platforms are considering making part of their catalog free. And the major telephone companies in Beijing will offer a 20 gigabyte Internet plan to their subscribers during the holidays. But these incentives should not completely eliminate travel. So to reduce the risks as much as possible before this holiday week, China has taken the lead, embarking on a vaccination race. With the goal of having vaccinated 50 million people by Friday.

The progress of FC Nantes, the class of Randal Kolo Muani and the return of smoke bombs