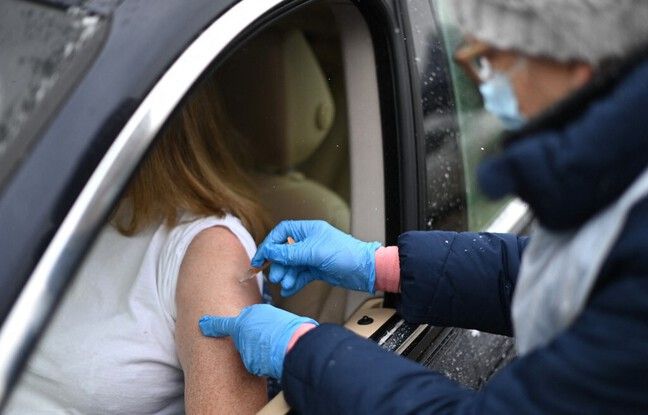 The goal was ambitious and yet. This Friday, the United Kingdom appears to be on the verge of reaching the 15 million vulnerable Britons vaccinated before mid-February, giving hope for an imminent exit from containment.

It’s a tour de force for Tory Prime Minister Boris Johnson, hitherto credited with chaotic handling of the pandemic that has infected nearly four million people and killed more than 115,000 of them in the 66 million country inhabitants, the most bereaved in Europe. His government has made the vaccination campaign, the first to be launched in a Western country in early December, a national cause to get out of the health crisis, in the face of a new variant that has appeared much more contagious in England.

In total, more than 13.5 million people in the first four priority groups – the over 70s, caregivers, nursing home workers and their residents – have already received a first dose of the AstraZeneca / Oxford vaccine or Pfizer / BioNTech, according to official figures as of Wednesday. Almost 525,000 people have been vaccinated with the two required doses, which authorities have decided to space out for up to 12 weeks in order to be able to immunize as many people as possible.

As the vaccination campaign progressed rapidly, injections began to be offered to the following priority groups in certain areas of the country, namely those over 65 and even over 60. By May, the government expects to have vaccinated the nine priority groups, that is, the 32 million vulnerable people or over 50 years old, representing 99% of deaths. And all adults by September.

While waiting for the first injection

Daily The Guardian However, said Friday, citing a survey by the professional association of the sector, that more than 400,000 people out of 656,000 providing home care to the elderly or vulnerable have still not received their first dose.

Wales will be the first nation in the country to have offered an anti-Covid vaccine to its inhabitants most at risk, or 740,000 people, Friday or during the weekend “at the latest”, welcomed the Prime Minister Welsh, Mark Drakeford, on the BBC. He stressed that the pace of injections would slow down a bit over the next two weeks, due to a drop in vaccine supplies, before resuming in March.

This success should soon allow a “cautious” relaxation of certain restrictions, according to him. “We can see a path to a spring where we can once again do things that we miss so much,” he hoped.

Boris Johnson’s government hopes to be able to begin to very gradually lift the confinement imposed in early January from March, targeting as a priority the reopening of schools currently closed, as well as non-essential stores, pubs and restaurants. Pressured by some deputies of his conservative majority to strongly loosen the screw, the leader must present a roadmap to end the crisis in the week of February 22.

Carrefour is testing subscriptions for its customers