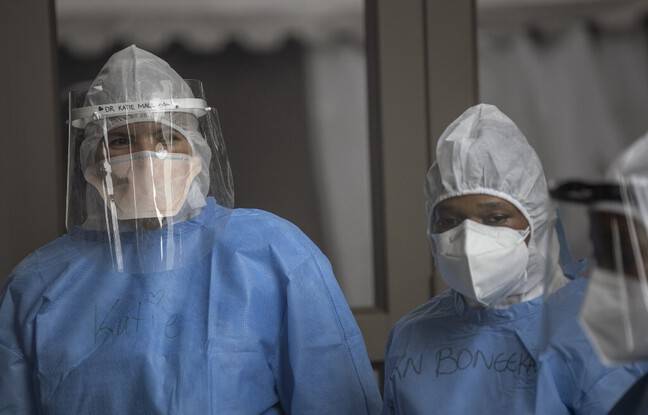 Insults, beatings, arrests … On the front line in the face of the coronavirus epidemic, health workers suffered more than 400 acts of violence linked to the virus around the world in 2020, according to a report published by the Coalition for the Safeguarding of the health during conflicts (CSSC), an NGO for the defense of caregivers, this Tuesday.

The NGO listed 1,172 acts of violence and attacks against people or health infrastructure worldwide last year, “a minimum estimate” according to the organization, of which more than a third – 412 – directly concerns the Covid -19.

In Mexico, a nurse was attacked and injured by a group who accused her of spreading the virus. In Dakar (Senegal), three social workers were stabbed by residents who refused to allow a coronavirus victim to be buried near their homes. In Birmingham (Great Britain), a caregiver was the target of spitting and insults from one of her neighbors.

The vast majority (80%) of the perpetrators of violence are civilians, but the threat also sometimes emanates from the public authorities. In Egypt, caregivers who criticized the regime’s handling of the pandemic were arrested by the security services, accused of spreading false information and belonging to a terrorist group.

Insecurity Insight, which is a member of the coalition and developed the interactive map after collecting data on these acts of violence, also identified 802 attacks in countries at war or theaters of civil conflict: hospital bombings in Yemen, kidnapping of doctors in Nigeria or destruction of bottles of hydroalcoholic gel in an attack blamed on English-speaking separatist fighters in Cameroon.

“The map shows that violence and bullying against healthcare workers was truly a global crisis in 2020, with 79 countries affected,” Christina Wille, director of Insecurity Insight, said in a statement. Leonard Rubenstein, founding president of the CSSC and professor at Johns Hopkins University in the United States, called on governments around the world to protect their caregivers, including fighting against disinformation and ensuring that perpetrators of violence are punished.

Share
Facebook
Twitter
Pinterest
WhatsApp
Previous article
The odyssey of the 2,700 Spanish cattle that have been roaming the Mediterranean for two months
Next article
Two Americans suspected of aiding former Renault CEO handed over to Japanese authorities

This is not surprising ... 35-year-old Novak Djokovic reaches the final of the Australian Open for the 10th time...

End of a long struggle. After nine difficult months of holding on mentally, physically and holding out hope...

Pensions: RN finds it ‘scandalous’ that its elected officials are not welcomed at demonstrations

Real estate: buying a life annuity from a very sick person is possible under certain conditions

Not because a person is very sick, the sale of his lifetime property will be zero. It does...

While the eyes of the world are on Ukraine and Russia, there has been an unresolved conflict in...

This text contains slight spoilers for the movie.In the chaotic and eccentric we find beauty. That's how it...

While the eyes of the world are on Ukraine...
World

British tanks are expected to arrive in Ukraine by...

Pensions: RN finds it ‘scandalous’ that its elected officials are not welcomed at demonstrations