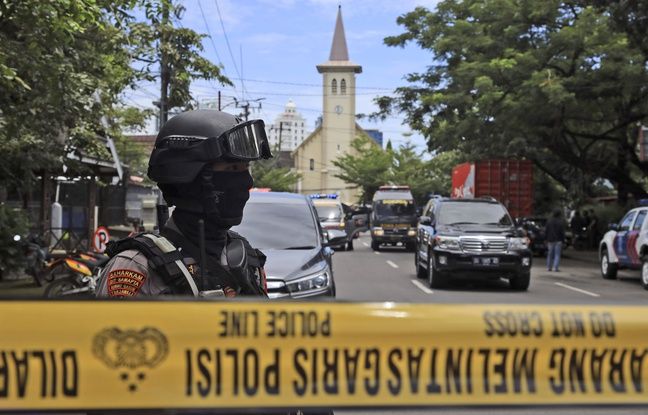 Indonesia is once again facing a terrorist attack. At least 14 people were injured on Sunday in a suicide bombing attack that targeted Makassar Cathedral in the east of the country after Palm Sunday, a celebration that marks the start of Holy Week for Christians.

The exterior of the building in the south of the island of Celebes was littered with pieces of human bodies following this powerful explosion which occurred around 10:30 a.m. (5:30 a.m. in France). If the police gave the provisional figure of 14 wounded, it did not however give details on their state of health.

Police try to identify the attackers

“Two people were riding motorcycles when the explosion occurred at the main gate of the church, the attackers were trying to enter the perimeter of the church,” said national police spokesman Argo Yuwono. “The motorcycle was destroyed and there are body parts. We are still picking up the pieces and trying to identify the gender of the attackers. “

Earlier, police in South Sulawesi province, of which Makassar is the capital, said at least one assailant had perished. The national police did not confirm this information. “There are a lot of pieces of human bodies near the church and also in the street,” said Mohammad Ramdhan, the mayor of this port city of 1.5 million inhabitants.

Police said a security guard tried to prevent the motorcycle from entering the perimeter of the Sacred Heart of Jesus Cathedral, seat of the Archdiocese of Makassar just before the blast. “We had finished Mass and people were going home when it happened,” said Priest Wilhelmus Tulak. Many vehicles were damaged near the cathedral complex, around which the police were establishing a security cordon.

Churches have in the past been the target of extremists in Indonesia, the most populous Muslim-majority country in the world. In May 2018, a family set off bombs against three churches in Surabaya. The same day another family detonated, apparently by accident, a bomb in an apartment and the following day a third committed a suicide attack on a police station. These attacks, which left a total of 15 victims and 13 deaths among the attackers, were the deadliest in more than a decade in the archipelago. The three radicalized families were linked to the radical movement Jamaah Ansharut Daulah (JAD), which supports the Islamic State (IS) group. And the attacks had been claimed by ISIS.