The ship still blocked on the sixth day, new operations are being prepared 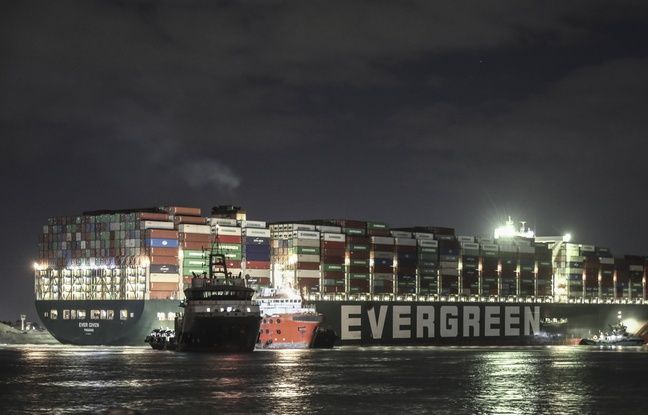 New operations are being prepared on Sunday to relaunch the Ever Given, a giant container ship which is blocking the Suez Canal, one of the world’s main shipping lanes for the sixth day, but a high tide expected in the evening could make the task easier.

In a telephone interview with an Egyptian television station on Saturday evening, Admiral Ossama Rabie, chairman of the Egyptian Suez Canal Authority (SCA) claimed that the ship had “moved 30 degrees to the right and to the left” for the first time.

“It is a good indicator”, according to him, of the evolution of the efforts of unblocking of the giant of the seas. The ship of more than 220,000 tons and 400 meters long has been stuck since Tuesday in the southern part of the Suez Canal, a few kilometers from the eponymous city, preventing all traffic in this passage which concentrates more than 10% of international maritime trade .

As a result, more than 300 boats are stuck at both ends of the canal connecting the Red Sea to the Mediterranean Sea, Ossama Rabie said on Saturday. Each day of blockage causes significant delays and costs for players in the sector, and the first concrete effects are felt: Syria said on Saturday that it had started to ration the distribution of fuels, faced with the delay in the delivery of a cargo of oil.

Focus on other caps

The canal authorities, for their part, stressed that Egypt was losing between 12 and 14 million dollars per day of closure, while the specialist magazine Lloyd’s list estimates that the container ship blocks the equivalent of around 8 per day, 1 billion euros of goods.

Maritime traffic visualization sites such as Vesselfinder or Marine Traffic always show on Sunday the dozens of ships waiting in the Gulf of Suez, in the waiting area in the middle of the canal or at its entrance to the Mediterranean, near Port Said. In addition to the tugs, dredges are at work to suck up the sand in which the ship is stuck.

The high tide forecast for Sunday evening with a significant coefficient could help the technical services of the SCA and the experts appointed by the operator of the vessel. In the meantime, shipping giant Maersk and Germany’s Hapag-Lloyd said on Thursday that they planned to divert their ships and pass through the Cape of Good Hope, a detour of 9,000 kilometers and at least seven additional days. navigation.

Ossama Rabie, who spoke for the first time at a press conference on Saturday, mentioned a possible “human error” as being at the origin of the incident. According to him, the weather conditions initially mentioned were not the only reason for the grounding.

How to react to a leak on your roof?