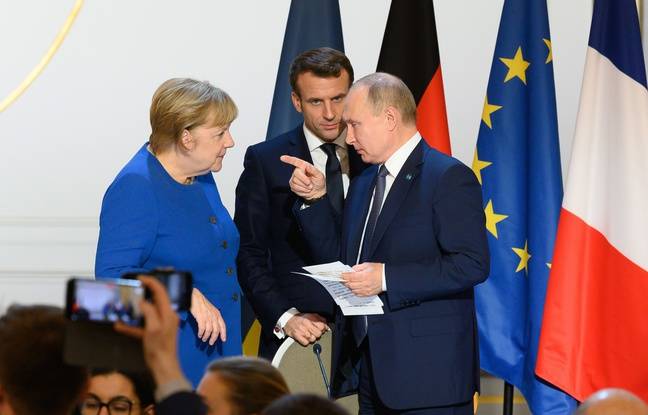 Moscow asked Emmanuel Macron and Angela Merkel this Friday to put pressure on their Ukrainian counterpart, with whom they are to meet in the afternoon, to stop the “provocations” from Kiev in the east of the country.

Volodymyr Zelensky, welcomed at midday by his French counterpart at the Elysee Palace before a trilateral videoconference with the German Chancellor, calls for increased support from Europeans in the face of the concentration of Russian troops on the borders of Ukraine. “It would be very important for us that Emmanuel Macron and Angela Merkel use their influence during this videoconference (…) to explain to him the possibility of a definitive cessation of all provocations” on the front, affirmed the spokesperson. of the Russian Presidency, Dmitry Peskov.

For several weeks, clashes have been increasing between Kiev and pro-Russian separatists in Donbass (eastern Ukraine), while tens of thousands of Russian soldiers have been deployed nearby, raising fears of a large-scale military operation. The West, for their part, warned Russia against these demonstrations of force and called on Moscow to “de-escalate”.

In this context of new volatility, seven years after the annexation of Crimea by Russia and while the conflict is still not resolved in the Donbass, the Ukrainian president is loudly asking for his country’s accession to NATO and the European Union. “We cannot stay indefinitely in the EU and NATO waiting room,” Volodymyr Zelensky said in an interview with the French daily Le Figaro.

In search of living together

“If we belong to the same family, we have to live together. We cannot go out together forever, like eternal fiancés, we must legalize our relations, ”he insisted to the attention of Paris and Berlin. However, NATO membership seems very remote in view of Russia’s fierce hostility to such a scenario and the reluctance of a number of Alliance member states, including France, for fear of provoking Moscow.

As for entry into the EU, it remains just as hypothetical. “We can support Ukraine (..) but that does not mean membership, it is not a serious prospect”, noted the French Secretary of State for European Affairs Clément Beaune.

Paris and Berlin, mediators within the framework of the quadripartite dialogue with Russia and Ukraine (called “Normandy format”), for their part intend to “play their role” to safeguard the ceasefire and relaunch the political process, explains the Elysee.

“All the work we do is to avoid escalation, to reduce tensions”, underlined the French presidency. Tensions around Ukraine are rebounding as relations have been stormy between the United States and Russia since Joe Biden arrived at the White House in January.

The President's Government Joe Biden prohibited the authorizations of new equipment of telecommunications of the Chinese giants Huawei...

Everything that the first day of Qatar 2022 left us: the numbers, the surprise, the crack, the disaster, the viral

After 16 vibrant games, the first date of the World Cup Qatar 2022 It ended. A championship...

Paraguayan recorded 151 infections of the covid-19 during the past week, which meant 129 more cases than in...

How long will Neymar be back? Doctor explains about the injury suffered by the Brazilian number 10 in Qatar 2022

Less than 24 hours after Brazil will show in Qatar that joy is theirs after defeating Serbia 2-0 ...

The two men were sitting at a bar on November 21, sipping drinks to cool off from the state's...

The story behind the surprising Ecuador, a team that is pure personality

We have been saying it for a long time: it is the football that has evolved the most in...

Paraguayan recorded 151 infections of the covid-19 during...
World

The two men were sitting at a bar on...
World

the chinese president, Xi Jinpingconveyed to the North Korean...

Everything that the first day of Qatar 2022 left us: the numbers, the surprise, the crack, the disaster, the viral