Residents of Goma evacuate in disaster, facing the risk of eruption of the Nyiragongo volcano 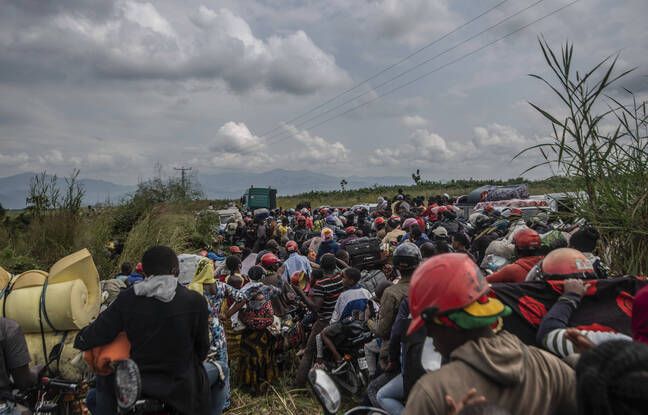 Tens of thousands of people rushed to flee the city of Goma in eastern Democratic Republic of Congo (DRC). A wave of panic arose just after the authorities gave the order to evacuate in the face of the risk of a new eruption of the Nyiragongo volcano in the city. “The current data of seismicity and soil deformation indicate the presence of magma under the urban area of ​​Goma, with an extension under Lake Kivu,” said at dawn, in an address to the population, the governor soldier of the province of North Kivu, General Constant Ndima.

“We cannot currently exclude an eruption on land or under the lake (Kivu) which could occur very soon, or even without any warning sign”, explained General Ndima, citing the names of ten districts of the city to be evacuated ” obligatorily ”. “It’s fear, it’s panic, everyone is fleeing,” said a resident, who like many others fled to the locality of Sake, west of Goma, and the entire Rwandan border. close.

Traffic jams, crowd and queue in front of the bank

A few hours later, at the end of the morning, it was still huge traffic jams and the crowd at the southern exits of Goma, but a relative return to calm in the streets of the city center, where few shops were open, and where for example ten people lined up in front of a bank with its doors closed.

“Additional risks are linked to the interaction between lava and water” in the lake, warned the governor, clearly evoking the disaster scenario, well known and identified for Lake Kivu, of a risk of destabilization of the lake. gas under the lake (“limnic eruption”, in the jargon of specialists). “They are of several kinds”, he enumerated: “interaction of magma with lake water, destabilization of the volume of gas dissolved under Lake Kivu and emission of potentially dangerous surface gases”. “The situation can change quickly, it is under constant surveillance”, and in “anticipation of this possible disaster, the evacuation is compulsory and will be done towards Sake (locality 20 km west of Goma), added the governor. .

In a statement from Kinshasa, the Ministry of Communication also justified: “the persistent threat of eruption and repeated earthquakes oblige the government to activate as a preventive measure a progressive evacuation plan for the inhabitants as soon as possible (… ) ”. Calling for calm, the authorities claim to have provided means of transport and to deploy police patrols “to secure property and people”. Means, which some inhabitants have not seen the color.

Some flee with meager goods in plastic bags

“We are amazed. We do not see these means to leave Goma, there are too many traffic jams, the prices of motorcycle taxis are exploding, ”lamented another fugitive, Agnès Kahindo, on the road to Sake. The streets in the southern part of Goma were immediately invaded and congested, with people walking, jogging or running, carrying mattresses, sports bags or a few meager possessions in plastic bags, holding hands with children. scared so they don’t get lost.

At the port of Goma, it was also the crowd. The crowd was thronging to board boats heading for Bukavu, in South Kivu, where thousands of displaced people are gradually arriving, via the lake or the road. No doubt for fear of a capsizing of an overloaded boat, the authorities prohibited navigation on the lake in the morning. People were also fleeing north from Goma, via Rutshuru, taking in the thousands, most of them on foot, the road cut in that direction by Saturday’s lava flow.

32 dead since the eruption on Saturday

Departures to Rwanda were proceeding more calmly, while as the hours passed, as the inhabitants left the city, general panic seemed to give way to a strange calm in the partly emptied Goma. “We have the impression that not everyone is going to leave,” a resident testified on RTNC, public TV.

Goma has more than 600,000 inhabitants, for an agglomeration of two million people, according to the administration. The ten districts of Goma evacuated Thursday are “exposed to lava exit points, which are not foreseeable for the moment”, according to Governor Ndima. To date, the death toll is 32 since the eruption on Saturday. The previous major eruption of Nyiragongo, on January 17, 2002, killed around 100 people. The deadliest eruption in Nyiragongo killed more than 600 people in 1977.

What to remember from the main measures of the finance bill