The troops ukrainian They tried this Friday to push back the Russian forces in the east and south of the country, the scene of fierce fighting for weeks, in a war that seriously affects the world’s grain supply.

France precisely offered help to guarantee access to the Ukrainian port of Odessa, on the Black Sea, to alleviate this pressure that is triggering inflation and threatening to cause food shortages on all continents.

Look: The war in Ukraine as seen by an 8-year-old boy

The General Staff of the Ukrainian army indicated on Facebook that it had hit “Russian positions” in five towns in Kherson (south), one of the first regions to fall under Moscow’s control after the start of the invasion, on February 24.

The Russian offensive, which was repelled in other parts of Ukraine, is currently focused on the south and east of the country, specifically in Donbas, made up of the provinces of Lugansk and Donetsk and partially controlled by pro-Russian rebels since 2014.

The fighting rages above all in Severodonetsk and neighboring Lysychansk, key positions in the conquest of this territory.

Russian troops already control part of this old industrial zone and, according to the governor of Lugansk, Sergei Gaidai, they have destroyed the Severodonetsk Ice Palace, one of the symbols of the town.

In a message released Thursday night, Ukraine’s President Volodymyr Zelensky said however that “Severodonetsk, Lysychansk and other Donbas cities, targeted by the occupiers, are resisting.”

This Friday, the Ukrainian president added: “For 107 days, Ukraine and our people have heroically resisted Russian aggression. Our resilience is a mystery and almost a miracle. We are passing a survival test.”

A Ukrainian military man maintains his position not far from the Ukrainian city of Chuguiv, in the Kharkiv region. (SERGEY BOBOK / AFP /)

Russia and Ukraine, responsible for 30% of world wheat exports, blame each other for the destruction of grain reserves. In addition, Ukraine has paralyzed millions of tons of grain that it cannot export due to the blockade of its ports.

On the other hand, Western sanctions prevent Russia from exporting much of its agricultural or fertilizer production.

An adviser to French President Emmanuel Macron said France was ready to help secure access to the Ukrainian port of Odessa.

kyiv refuses to remove the mines from this port, for fear that Moscow will take the opportunity to attack the city.

“We are at the disposal of the parties to launch an operation that allows safe access to the port of Odessa, that is, that allows the passage of ships despite the fact that the sea is mined,” said the French adviser. 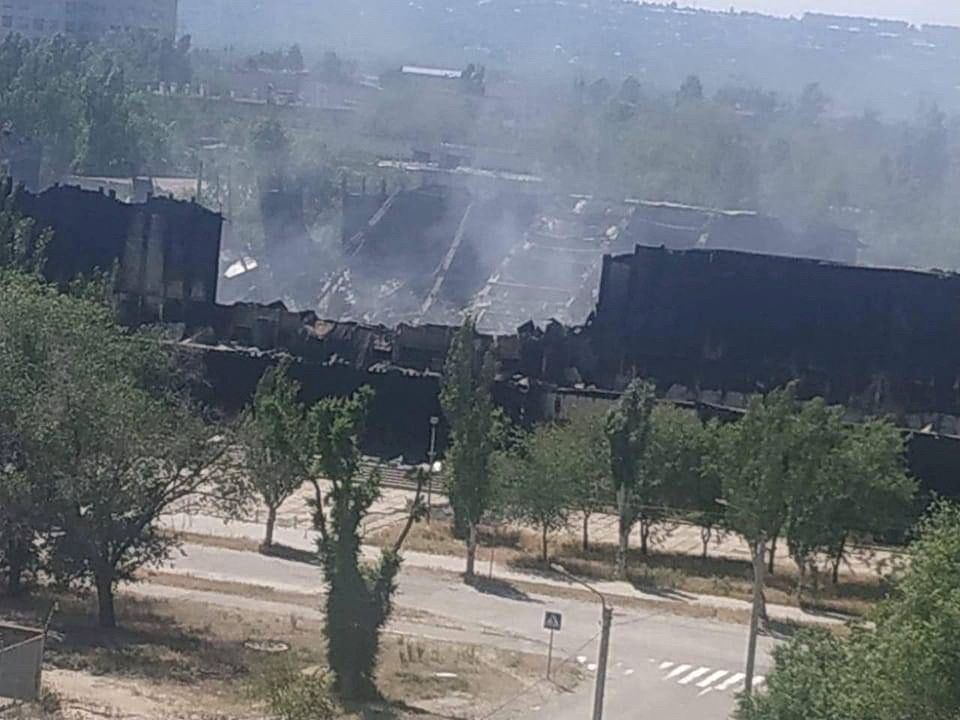 The charred remains of an ice sports facility are seen in Sievierodonetsk, Luhansk region, Ukraine. (Serhiy Hadai/Handout via REUTERS/)

Macron will travel next week to Romania and Moldova, which share a border with Ukraine. But no date has yet been set for him to visit kyiv, according to the Elysee.

The French president has not yet visited the Ukrainian capital, unlike many of his European peers.

Zelensky praised Britain’s leadership and its support against Russia, during an unannounced visit by UK Defense Secretary Ben Wallace.

“Words become deeds. That is the difference between Ukraine’s relationship with Britain and other countries,” Zelensky said in a video.

The French presidency said it wants “Ukraine’s victory”, after Macron aroused criticism from kyiv when he asked “not to humiliate Russia”.

The Russian invasion has put European countries on edge, with nine of them calling on NATO on Friday to reinforce its eastern flank.

The leaders of Bulgaria, the Czech Republic, Estonia, Hungary, Latvia, Lithuania, Poland, Romania and Slovakia met in Bucharest less than three weeks before an alliance summit in Madrid.

“In view of the increased security risks in Romania and the Black Sea, the consolidation of NATO on its eastern flank (…) is even more urgent and crucial,” Romanian President Klaus Iohannis said.

In addition to weapons, the Ukrainian forces have received reinforcements from thousands of foreign volunteers who enlisted to fight the Russian invasion.

Three of them, two Britons and one Moroccan, were sentenced to death on Thursday by separatist authorities in the Donetsk region, accused of acting as “mercenaries” for Ukraine.

They are the British Aiden Aislan and Shaun Pinner, who surrendered in April in the port city of Mariúpol (southeast), and the Moroccan Saadun Brahim, captured in March in the eastern town of Volnovaja.

The head of British diplomacy, Lizz Truss, assured that it was “a sham trial with absolutely no legitimacy” and a spokesman for her government demanded that they be treated as “prisoners of war”.

The UN considers that these trials did not have “guarantees” and constituted in themselves “a war crime,” said the spokeswoman for the UN High Commissioner for Human Rights, Ravina Shamdasani.

A cream always comes in handy and much more so when you can achieve the maximum flavor of your...

Six months before being killed by her husbandthe Mexican singer Yrma Lydya denounced the lawyer Jesús Hernández Alcocer for...

A Republican member of the US Federal Communications Commission (FCC) urged the CEOs of Apple and Google to expel...

Jaime León, former president of the ‘U’, is runner-up in the World Athletics Masters

The Tampere 2022 World Masters in Athletics in Finland is in dispute and there were positive developments regarding the...

Last minute of the protests and National Strike in Ecuador, LIVE: Dialogue between the Government and the indigenous movement

On the 18th day of the national strike in Ecuadorthis Thursday, June 30, anti-government demonstrations are taking place in...

Six months before being killed by her husbandthe Mexican...
World

Last minute of the protests and National Strike in Ecuador, LIVE: Dialogue between the Government and the indigenous movement

On the 18th day of the national strike in...
World

NATO’s plan to deploy 300,000 soldiers in one month in emergencies

the war in Ukraine has led the leaders of...
World

An agent of the Argentine Federal Police (PFA) killed...