Who is responsible for the Texas truck tragedy that killed 50 migrants?

The discovery this Monday of at least 50 people dead inside a truck near San Antonio (Texas), in southwestern USAhighlights the desperation of many immigrants willing to put their lives in the hands of human traffickers to make the dangerous border crossing.

The tragedy has also served, however, for Democrats and Republicans in the US to once again air their differences regarding the migratory crisis that the country is experiencing, accusing each other of being responsible for what happened.

It didn’t take long after the macabre discovery in Texas for recriminations to begin on both sides of the political spectrum.

Republican Governor of Texas Greg AbbottHe was the first to speak accusing President Joe Biden of being responsible for the deaths.

“They are the result of their deadly open border policies,” he declared. “They show the fatal consequences of their refusal to enforce the law.”

“The fact is that the border is closed, which is part of the reason why you see people making this dangerous journey through smuggling networks,” he said.

This political standoff is not surprising given the polarized environment in Texas at the moment, notes BBC North America correspondent Anthony Zurcher.

“Abbott is in the midst of a re-election campaign in which he has placed heavy-handed immigration policies and a host of burning cultural and social issues at the center of the issue.”

Texas Governor Greg Abbott is campaigning for re-election and has strengthened the military presence on the border with Mexico. (GETTY IMAGES).

Abbott accuses the Biden administration of relaxing the immigration policies of his predecessor Donald Trump and holds him responsible for the recent wave of undocumented migrants at the border.

For his part, the Democratic candidate for governor, Beto O’Rourke, assures that the redoubled border patrol authorized by Abbott is partly responsible for the human trafficking networks that endanger migrants who do not find legal ways to enter. In U.S.A.

The deaths in San Antonio come just a month after the massacre at a school in the neighboring city of Uvalde, Texas, which led to another series of accusations and recriminations between the two gubernatorial rivals.

LOOK: Tragedy in Texas: Police reveal how they discovered the bodies of the 50 migrants in an abandoned truck

The accusations between Democrats and Republicans extended to the legislative sphere.

Two representatives to the US Congress from different districts in San Antonio, Democrat Joaquin Castro and Republican Tony Gonzales, had their confrontation. 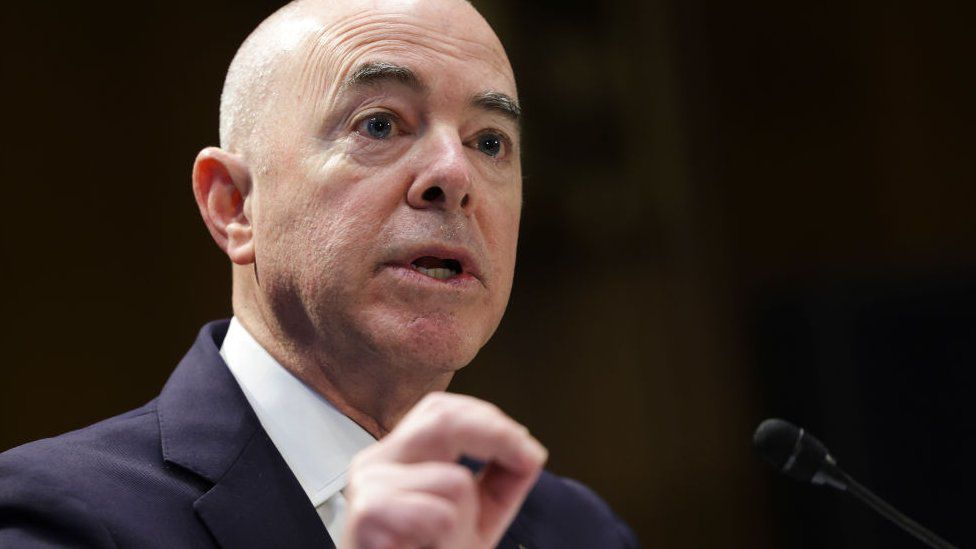 Castro blamed the tragedy on the Trump administration’s immigration policies that his successor Biden has been unable to repeal.

He urged the removal of Title 42, a Trump-imposed pandemic-related order that allows for the mass removal of asylum seekers, warning that it “has created more business, repeat business, for human traffickers” and has “put desperate and downtrodden people at grave risk of death”.

The Republican congressman called for the hiring of more border agents and an end to the practice of “catch and release” migrants awaiting trial.

In a Twitter message, he called for the resignation of the Secretary of Internal Security, Alejandro Mayorkas, whose ministry is in charge of enforcing immigration laws.

And the border agents themselves have not kept their opinions to themselves. 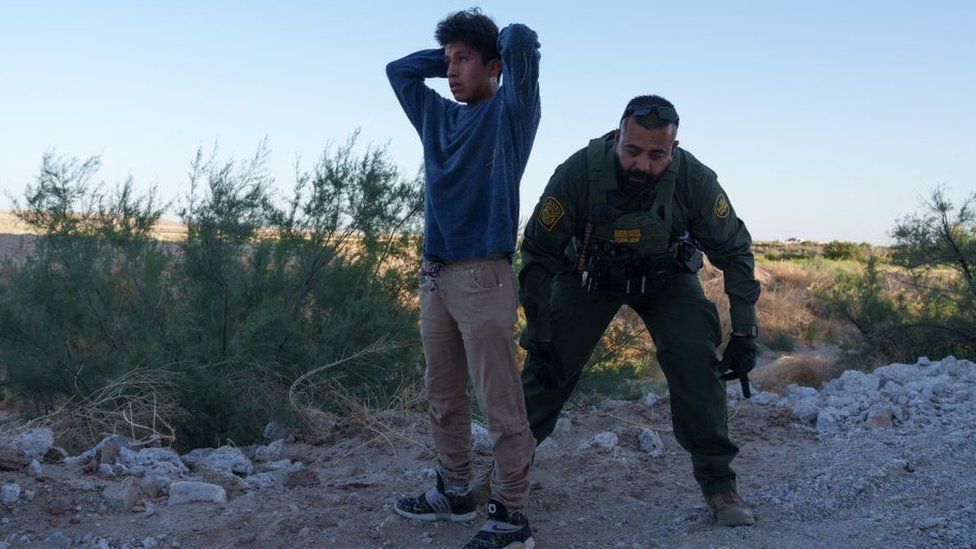 In May, the number of arrests at the border rose. (GETTY IMAGES).

The National Border Patrol Council (NBPC) also blamed the immigration policies of the Biden administration for the deaths in Texas.

The NBPC is a union that represents some 18,000 border patrol agents.

In a series of Twitter messages posted Tuesday morning, the council said the government and its policies “are the biggest factor driving criminal chaos on the border, and they must accept responsibility.”

Responding to White House claims that the border is closed, the NBPC said, “Someone should ask them how we ended up with 46 people trafficked from the border to San Antonio.” 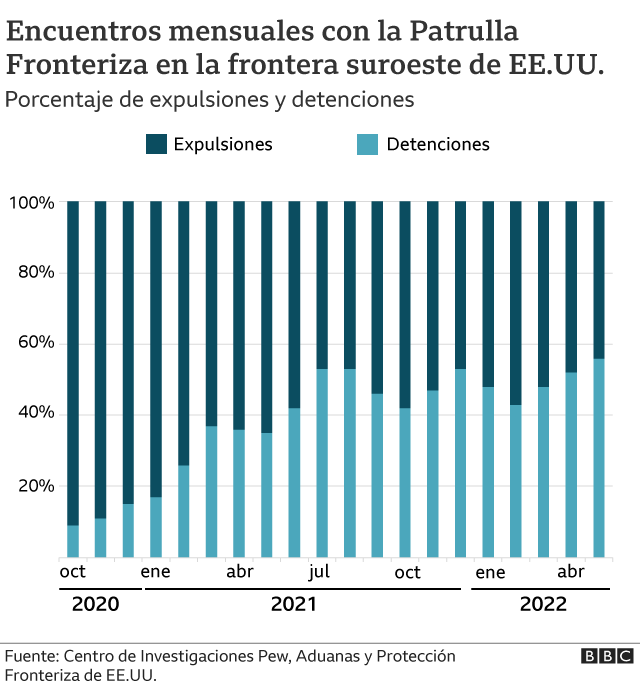 Graph with total apprehensions at the US Southwest border.

“How could they get through a ‘closed border’?”stressed the union.

A former U.S. Customs and Border Protection commissioner under President Barack Obama has come to the administration’s defense, saying that blaming President Biden’s actions for the deaths was “partisan politics.”

Gil Kerlikowske told the BBC that the dangerous crossings of migrants can be explained by issues related to covid and the “economic opportunities” offered by life in the US.

Kerlikowske hopes there will be a record number of arrests along the border this year.

In May alone, the statistics recorded 239,416 arrests at the border, an increase of 2% compared to the previous month. 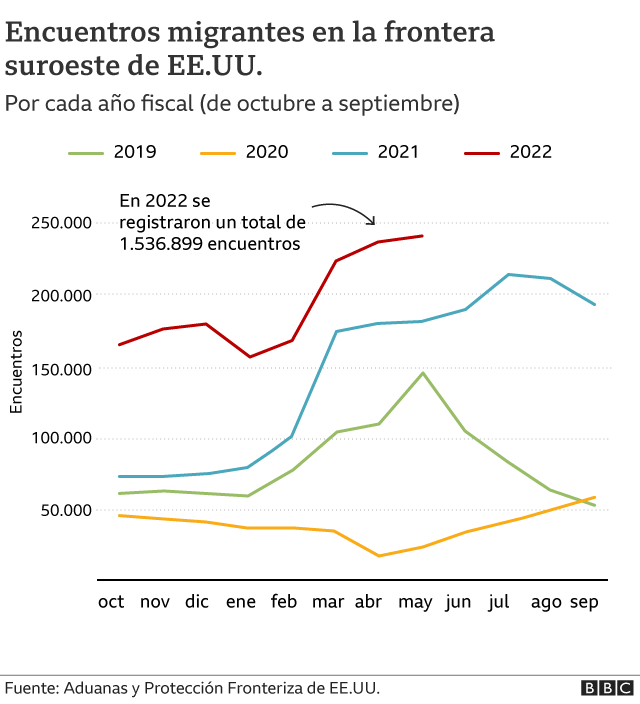 Graphic of migrant encounters at the border

The authorities warn that at this rate the “encounters” with migrants will exceed two million in the fiscal year that began in October, the highest rate in more than 20 years.

“It can’t be up to the US border patrol alone to handle this surge,” Kerlikowske said.

He accused Congress of not adopting an immigration reform policy to create “some kind of system that would be consistent for people hoping to come to the United States.”

During his administration, then-President Barack Obama unsuccessfully tried to get both houses of Congress, then dominated by the Republican Party, to vote in favor of immigration reform.

The way was left open for the next president, Donald Trump, to advance his vision of a great and impenetrable wall, the virtual militarization of the border, and the imposition of draconian laws. 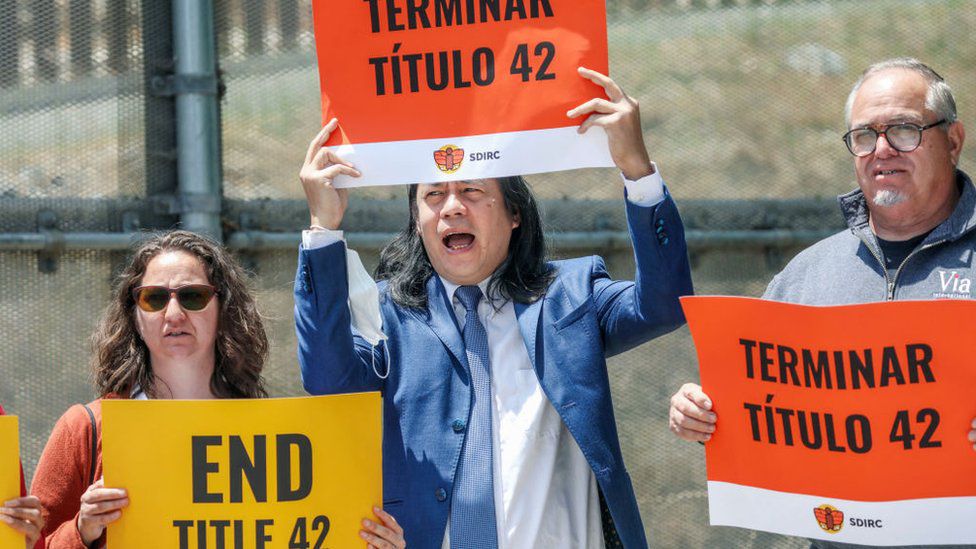 The measure known as Title 42 is about to expire. (GETTY IMAGES).

The first law is about to expire and the second was repealed by Biden, arguing that it is not an effective measure to deal with the waves of migrants at the border.

But last year, a federal judge in Texas ruled that action violated immigration law and ordered the government to reinstate the measure.

Now, after issuing its seismic ruling on abortion last week, the US Supreme Court is expected to make another important decision on immigration in the next three days.

In its final week of its 2021/22 session, the court must rule on whether the Biden administration has the authority to repeal the immigration policies of its predecessor.

This Thursday was not only bad news for PSG. Despite the fact that we learned about the alleged...