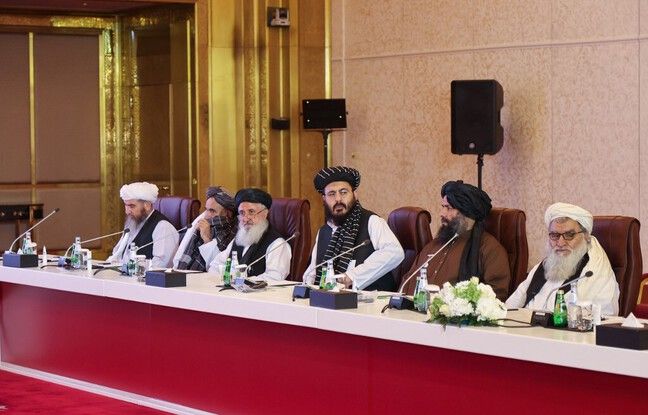 In a message on the occasion of Eid el Adha, the leader of the Taliban repeated, this Sunday, to remain “resolutely in favor of a political settlement” in Afghanistan, “despite the advance and the military victories” recorded in the last two months by the insurgents.

“Instead of relying on foreigners, let’s solve our problems between us (Afghans) and save our homeland from the prevailing crisis,” continues Hibatullah Akhundzada in this message on the occasion of the Muslim feast of the Sacrifice which lasts three days from July 20.

The government deprived of US air support

Against the backdrop of an all-out offensive by the insurgents against the Afghan forces, delegations of the Afghan government and the Taliban resumed Saturday in Doha, Qatar, talks started in September and so far remained at a standstill. “We are, for our part, determined to find a solution through discussions, but the camp opposite continues to waste time,” said Hibatullah Akhundzada in his message. Launched at the beginning of May, thanks to the start of the final withdrawal of foreign forces from the country, the insurgent offensive encountered little resistance from the Afghan forces and enabled them to seize vast rural areas of Afghanistan and important border posts with Iran, Turkmenistan, Tajikistan and Pakistan.

Deprived of crucial American air support, the forces of the Afghan government no longer essentially control any more than the major axes and the provincial capitals. Some are surrounded by the insurgents but they have not recently launched a major offensive against these towns, with the exception of a brief incursion in July in Qala-i-Naw, capital of Badghis province, of which they were driven out after several days of fighting. The message from the leader of the Taliban makes no mention of a ceasefire on the occasion of Eid al Adha. Over the years, the insurgents have sometimes announced truces on the occasion of Muslim holidays.

In his message, the leader of the Taliban then unrolls a series of commitments from a future “Islamic Emirate” in power in Kabul. The Islamic Emirate was the name of the Taliban regime which ruled Afghanistan between 1996 and 2001 and was driven out by an international coalition led by the United States, after its refusal to hand over the leader of al-Qaeda, Osama bin Laden. , in the wake of the September 11 attacks.

“We want good and strong diplomatic, economic and political relations (…) with all the countries of the world, including the United States” and “we fully assure the neighboring countries, the region and the world, that Afghanistan does not will allow anyone to threaten the security of any other country from their soil, ”says Hibatullah Akhundzada. He promotes literacy and assures that “the Islamic Emirate will take special care and strive to create an environment suitable for the education of girls within the framework of the grandiose Islamic law”, while under their regime girls were banned from school and women from working. Although they have never been claimed, numerous attacks on schools have also been attributed to the Taliban in the past 20 years.

A more modern and moderate image

The Taliban leader assures journalists of his “commitment to freedom of expression, within the limits of Sharia law and national interests” and says he wants to work with international NGOs in the health sector. He also reiterates his promise to ensure the security of diplomats, embassies, consulates, humanitarian organizations and foreign investors. Since Washington announced last year the final departure of foreign troops from Afghanistan, following an agreement with the Taliban, the latter have been trying to display a more modern and moderate image, in particular vis-à-vis abroad.

The Taliban appear to have long operated under a single, effective chain of command, waging massive military campaigns, despite persistent rumors of disagreements within their leadership. But the question of the influence that the Taliban leaders will have on the commanders on the ground and whether they will be able to make them respect a potential peace agreement remains unanswered. Faced with the advance of the Taliban, who have recently moved closer to Kabul, concern is growing in Afghanistan, especially in the capital and among the educated elite and women, of their possible return to power, likely to annihilate 20 years of progress, even if a large part of the Afghan countryside remains very traditionalist.

The progress of FC Nantes, the class of Randal Kolo Muani and the return of smoke bombs