First prison sentence for an attacker of the Capitol 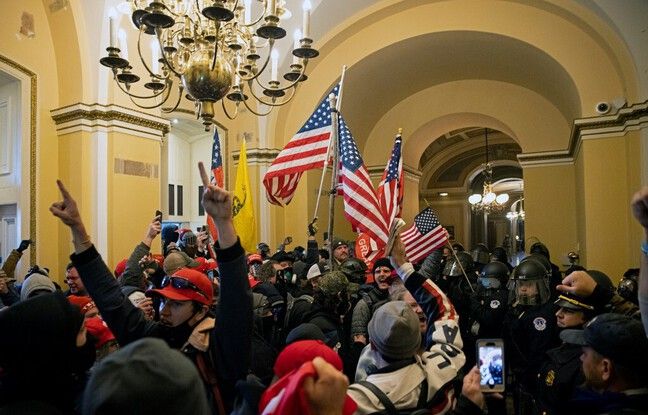 A man from Florida was sentenced on Monday by a Washington court to eight months in prison for participating in the murderous assault on the Capitol on January 6, a first since the attack that shook American democracy.

Paul Hodgkins, 38, had entered with hundreds of other supporters of Donald Trump in the seat of Congress, as elected officials certified the victory of Democrat Joe Biden in the presidential election, said the Department of Justice in a report. communicated.

Photos on file show the bearded, long-haired man in the Senate Chamber, ski goggles around his neck and carrying a large flag in the name of the former Republican president. Arrested on February 16 after being denounced, he had pleaded guilty to obstructing official procedures and the federal prosecutor had called for a sentence of 18 months in detention.

According to court documents, Paul Hodgkins had entered the Capitol with a backpack containing goggles, ropes and latex gloves, among other things. He had reached the chamber, where he had been photographed. However, the prosecution acknowledged that he had “not personally participated in or encouraged violence or destruction of property” and that he had “accepted his responsibility very early on.”

He had also spent less than half an hour in the temple of legislative power in the United States. Since January 6, more than 535 protesters have been arrested across the country for participating in the assault on the US Congress, and more than 165 have been charged.

Before Paul Hodgkins, two other people had been sentenced to prison. A woman had pleaded guilty and received a three-year suspended sentence in June, and a man was given three months after pleading guilty, but that sentence covered his pre-trial detention. Plea-guilty procedures are the norm in the United States, where the vast majority of federal criminal prosecutions are concluded without trial. But in the files related to the intrusion into the Capitol, very sensitive politically, the prosecutors seem reluctant to offer reduced sentences.

President Kais Saied formalizes the strengthening of his powers

What is the point of maintaining the health pass even in low-incidence departments?