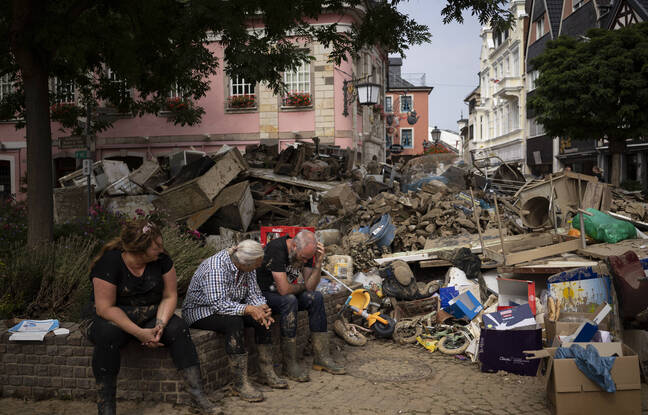 After the shock and the desolation, the helpers. The government of Angela Merkel must release this Wednesday a first emergency aid of several hundred million euros to relieve the victims of the deadly floods in western Germany, where reconstruction promises to be long and costly.

These floods, the biggest natural disaster in recent decades in Germany, have caused the death of 170 people in the country, according to a latest report. In Belgium, 31 people died, bringing the provisional toll of bad weather in Europe to 201 victims. But the number of victims is expected to increase further, said Sabine Lackner, vice-president of the German Federal Technical Relief Agency (THW), unsure whether there would be more survivors nearly a week after the floods.

In a project to be adopted by the Council of Ministers, Berlin and the regions, competent in matters of civil protection, undertake to pay in equal parts a sum of 400 million in immediate aid, according to a document that has filtered through several media Germans. It is a question of dealing with the most urgent, such as securing damaged buildings and infrastructure in the regions most affected by floods, some deprived of drinking water and electricity.

These sums are a very first step. They will be supplemented by “a reconstruction program in billions of euros, so that we can move forward quickly,” said the Minister of Finance, Olaf Scholz, in an interview with Rheinische Post. The details of the project are to be presented at a press conference this Wednesday morning with the Minister of the Interior, Horst Seehofer.

Berlin also plans to call on the European solidarity fund, which provides financial support to EU member states in the event of natural disasters. And the state is considering the creation of its own fund, also supplied by all the German regions in order to be able to release aid even more quickly in the event of a new disaster.

A difficult assessment of the damage

The rehabilitation of cities and infrastructure will be “a long-term job,” admitted Chancellor Angela Merkel on Tuesday. Seven days after the incident, it is still too early to establish an accurate assessment of the damage, said Transport Minister Andreas Scheuer. “In the Ahr Valley, we have 20 out of 35 bridges that are destroyed. This suggests the enormous task that awaits us, ”he said in an interview with the local newspaper. Passauer Neue Presse.

The public railway company reported “massive damage” in 80 stations. In Rhineland-Palatinate and North Rhine-Westphalia, the two Länder most affected by torrential rains, more than 600 km of tracks have been destroyed.

Insurers expect in any case to pay record damages.

Field invasion and new incidents between supporters during Angers-OM, the circus continues

56% of French people believe they have lost purchasing power with Emmanuel Macron, according to a survey