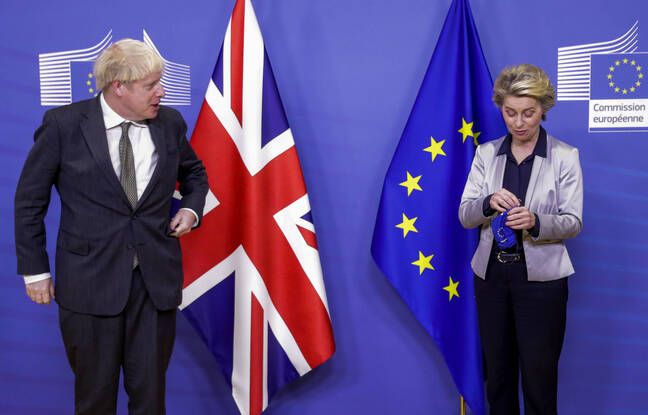 British Prime Minister Boris Johnson on Thursday urged the European Union to “seriously” study its proposals to renegotiate post-Brexit arrangements in Northern Ireland, which Brussels refuses as it stands.

In a call with the President of the European Commission, Ursula von der Leyen, the head of the Conservative government ruled that the Northern Irish protocol governing trade with the British province was “unsustainable” and “urged the ‘EU to seriously consider the proposals’ made by its government on Wednesday, Downing Street said in a statement.

The EU will continue to be creative and flexible within the Protocol framework. But we will not renegotiate.

We must jointly ensure stability and predictability in Northern Ireland.

For her part, Ursula von der Leyen assured that the EU would be “creative and flexible within the framework of the protocol”. “But we won’t renegotiate it,” she warned on Twitter.

To avoid the return of a border between Northern Ireland and the Republic of Ireland, the Northern Irish protocol, bitterly negotiated within the framework of Brexit, creates de facto a customs border between the British province, which still benefits from the single European market, and the island of Great Britain. This disrupts supplies to the territory and sows anger in the Unionist community attached to staying within the United Kingdom.

On Wednesday, the British government called for “a significant change in protocol”. Pending renegotiation, he called for a moratorium including the extension of the grace periods in force on certain controls as well as the freezing of legal actions brought by the EU.

London demands that British goods destined for the province and not for the European market can access it “almost” without customs controls. He also wants his standards, and not just those of the EU, to be accepted there so that goods can circulate unhindered.

The EU wants to protect its market

The EU has always rejected such measures, seeing them as a threat to the integrity of its own market due to the lack of a physical border and control between Northern Ireland and Ireland to the south.

The objective of the protocol is precisely to avoid such a border, which could compromise the peace obtained in 1998 after three decades of unrest between unionists, especially Protestants, and republicans, mostly Catholic (3,500 dead). Effective since January 1, it maintains the British province in the single market and the European customs union for goods, by providing for customs controls on goods arriving in Northern Ireland from Great Britain, separated by sea .

Three supporters arrested for violence after the derby