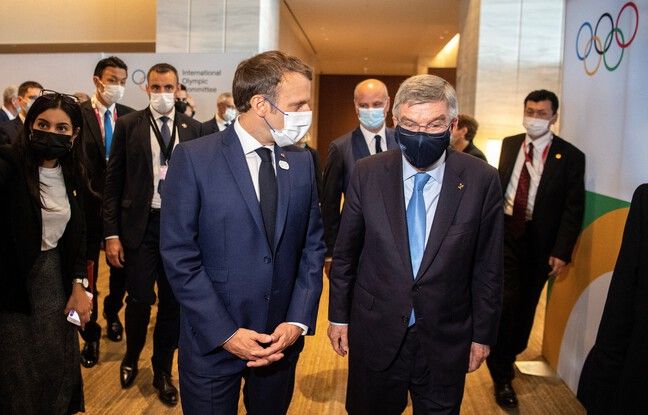 Because it is our project… President Emmanuel Macron arrived this Friday morning in Tokyo, where he is to attend the opening ceremony of the Olympic Games in the evening, in the evening. Shortly after his arrival, the Head of State met the President of the International Olympic Committee (IOC), Thomas Bach, in the Japanese capital, to whom he said: “We are preparing for Paris-2024”, and “we are hard at work ”.

“This is the result of a very good discussion with the IOC President, and we too will continue to move forward to prepare our country for the 2024 meeting, our athletes, but also our children, all of society. , and live up to these values ​​and the requirement of performance, ”he declared on his arrival at Club France.

The President acknowledged that the health situation remained a concern, but that it should not undermine sportsmanship. “Learning to live with the virus [du Covid-19], it is first of all to continue so that the spirit of Olympism in this period, where it is so necessary, which carries values ​​of cooperation, continues to unfold, ”he said, stressing that the Olympics were “an important event in the lives of our athletes”.

On Saturday, the head of state is due to meet with Japanese Prime Minister Yoshihide Suga, two years after his first official visit to Japan. The two leaders must notably discuss the situation in the Indo-Pacific zone, faced with growing maritime and military pressure from China, and bilateral economic relations between France and Japan. Emmanuel Macron also plans to meet with Japanese business leaders on Saturday to promote France’s economic attractiveness.

In Tokyo, beyond sport and geopolitical and economic questions, the French president is also expected on the subject of children abducted by one of their parents in Japan, a practice frequent and tolerated by the authorities in the country in the event of separation of the couple.

#VincentFichot, a Frenchman living in #Japan, has been prevented from seeing his children since their abduction by their Japanese mother in 2018.
He has been on a hunger strike since July 10 and hopes to attract the attention of Emmanuel Macron, expected at #Tokyo for the opening of #ALREADY pic.twitter.com/DBqf5X7cHl

Vincent Fichot, a Frenchman living in Tokyo and who has endured such a situation for nearly three years, has been on a hunger strike in front of a train station near the Olympic stadium since July 10. He insisted that he would not give up his action until he found his children or that France will not apply “sanctions” against Japan for non-compliance with its international commitments concerning human rights. the child.

“These are tragic situations” to which France “wants to find solutions with the Japanese authorities”, but it is up to Japan to lead this societal debate and not to France, the Elysee said earlier this week.

Share
Facebook
Twitter
Pinterest
WhatsApp
Previous articleAttacked and harassed by a bear, a man rescued by helicopter
Next articleThe health pass is a “huge handicap for the recovery”, says the boss of Medef who calls for its postponement to September 30

A dynasty of mayors as a girl